As young students in their early 20s, J.D. Graber and Minnie Swartzendruber thought they were headed toward careers as educators. A new set of correspondence at the Mennonite Church USA Archives sheds light on their early lives, their courtship, and their decision to serve as missionaries in India. The mostly handwritten letters between the two span a period of four years (1921-1925) and contain rich details about their family life, social networks, educational pursuits, and Mennonite faith.

About the decision to serve in India, J. D. wrote, “I’m absolutely sure if we make this a matter of earnest prayer God will take care of all difficulties and will open the door for us to go if He wants our lives in India.” In her letter of response, Minnie wrote that God’s strength gave her courage “and makes me willing that our comfortable little home in some college town should fade away. Such is alluring to a young lover’s eye but God forbid it should blind our eyes from the realities of life, the responsibility to be met, and the joy of doing it.”

After seventeen years in India, J. D. later served as the first full-time general secretary of the Mennonite Board of Missions from 1944 to 1967. Minnie was the president of the Women’s Missionary and Service Commission from 1950 to 1959 and spoke widely throughout the church. The collection also includes diaries and journals, sermon notes, and a series of published and unpublished manuscripts that J. D. authored over the course of his career.

Members leaving worship at First Mennonite Church, Allentown, Pennsylvania in 1958. This photo was one of a series promoting expansion of the church building at that time. By the late twentieth century, demographics had changed and the First Mennonite Church declined in membership, with nearly all members living outside the city. In 2006, the congregation closed, and the building was taken up by the Eastern District Conference for a English-Spanish bilingual church plant called Christ Fellowship.

During and after World War II, Mennonite Central Committee operated or supported numerous homes for orphaned children throughout Europe. Here MCC worker Edna Ramseyer, in front, holds the youngest member of the La Rouviere Children’s Home near Marseilles, France. Names of others pictured are unavailable.

Jacob Hostetter (or Hochstetter) was a farmer, mechanic, tailor, shoemaker, and basket-maker from the Manheim area. He was a bishop in the Lancaster Mennonite Conference who served as the Conference moderator following the death of Bishop Peter Eby in 1843.

This photographic portrait was taken in the 1850s and is remarkable in several ways. First, it depicts someone who was born before the United States of America existed. Second, it was made at a time when there was some contention among the Lancaster Mennonites about the use of photographic portraits. John Ruth writes that Hostetter “reluctantly yielded to his family’s persistent requests for his picture. But that brought him serious criticism, as expressed by an anonymous letter writer from Farmersville, in the conservative region of Groffdale. Bishop Hochstetter had acknowledged to the conference several years earlier that his picture had been taken, and he did not find it pleasant to have the matter thrown up to him again at the age of eighty-four.”1 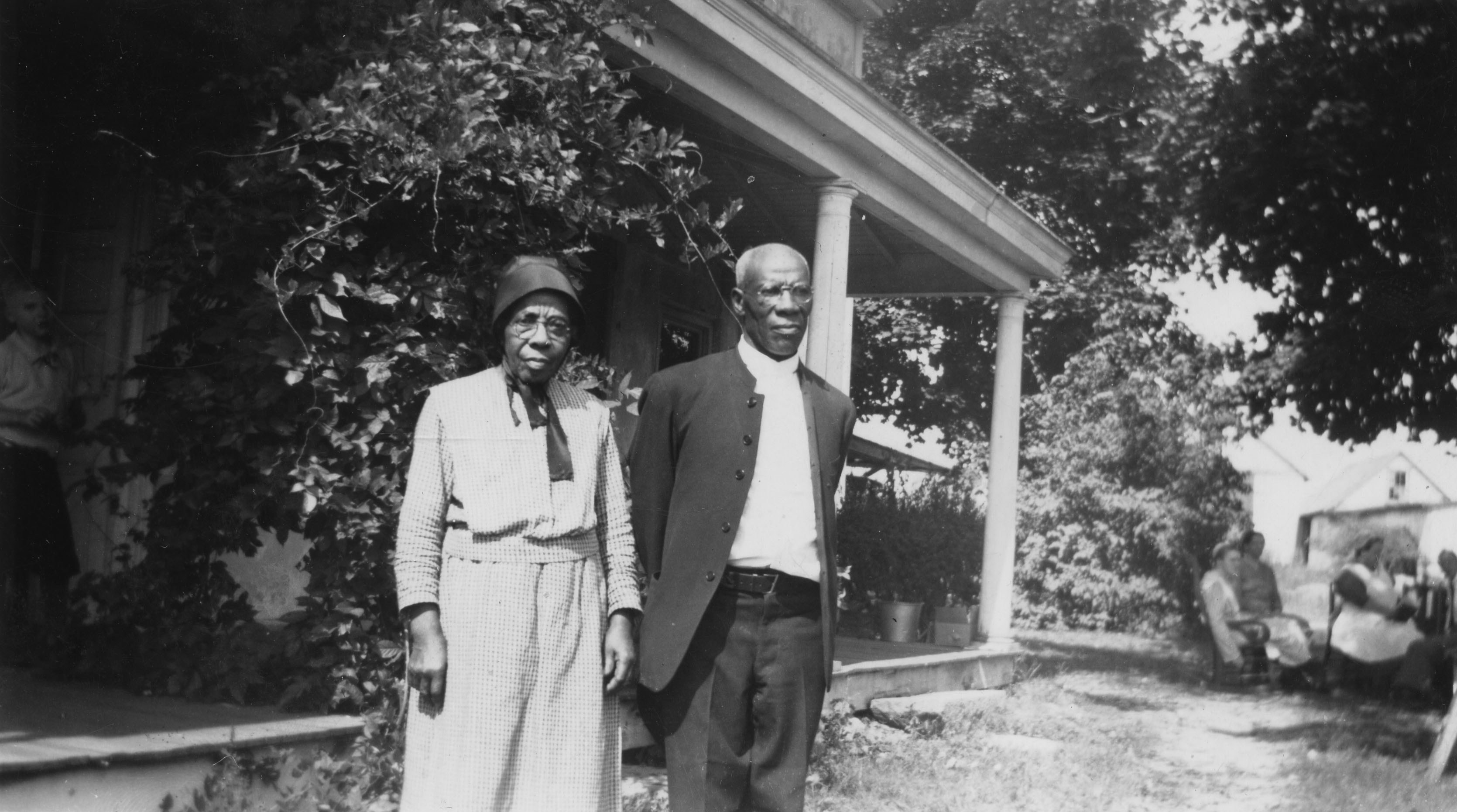 William and Clara Anderson, pictured here in plain Mennonite attire circa 1940, were early members of the Rocky Ridge Mennonite Mission near Quakertown, Pennsylvania. They were the first African-Americans to join a Franconia Conference congregation, in 1932. That year, at the conference in Franconia meetinghouse, a resolution was passed: “That a colored applicant applying for admission at the Rocky Ridge Mission, be baptized and received into the Mennonite Church.” This resolution, which was read from the pulpit in all conference congregations, established a standard of racial integration. 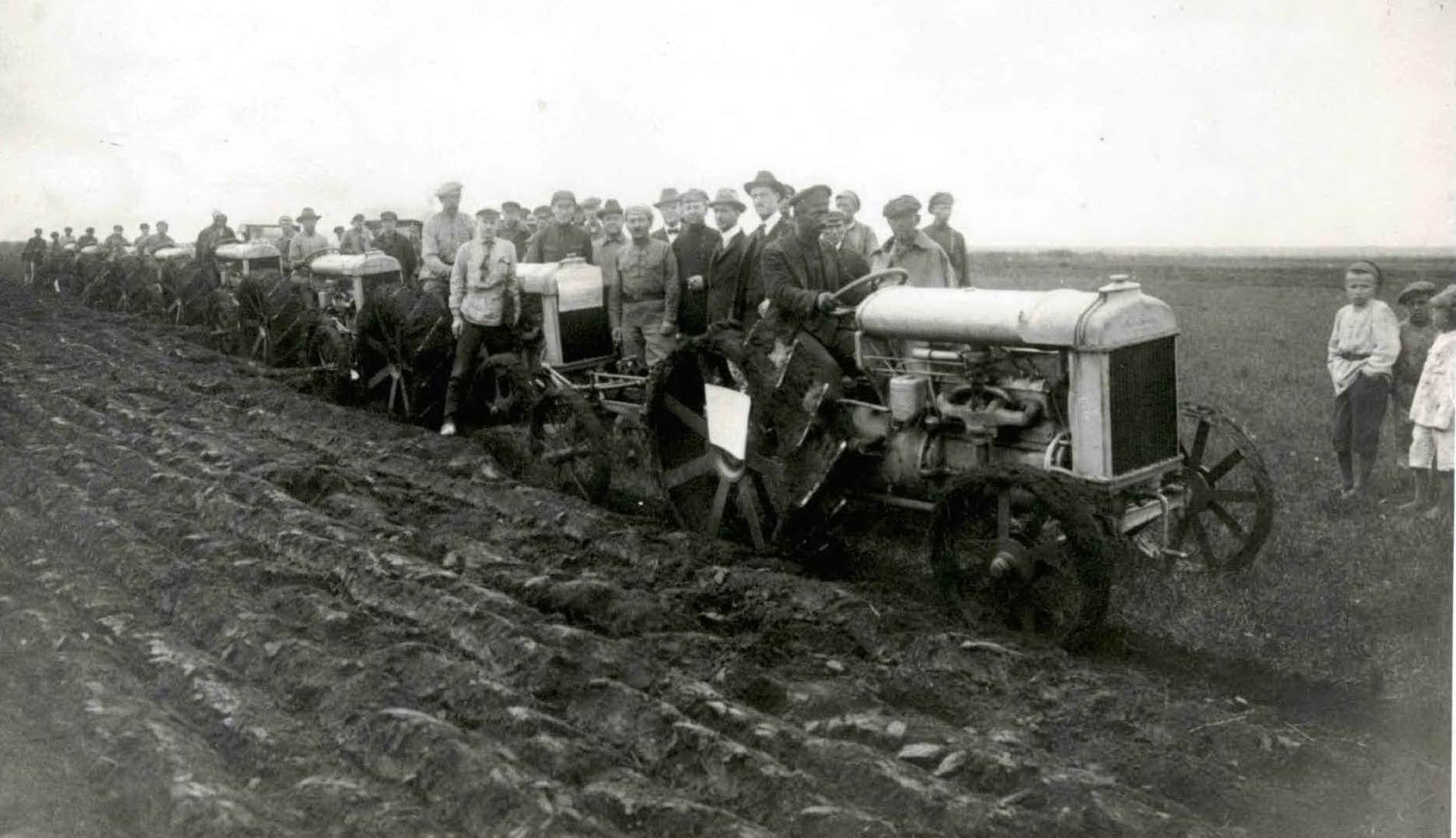 By mid-1922, many of the horses and other draft animals in South Russia had died due to the war and starvation. On June 26, Mennonite Central Committee purchased 25 Fordson tractors and Oliver gang plows, plus necessary spare parts, which left New York on July 24, arriving in Odessa in late August. These first tractor-plow units went to Chortitza and Molotschna. The total cost of the delivered shipment was US$13,838.90. A second shipment of tractors and plows left New York on December 23.

Relics from the early years of Mennonite mission work in Argentina: Catholic religious medals and symbols “given up” by converts. T.K. Hershey carried this little collection with him when he returned to tour North American churches. Sewed on to green sateen cloth and rolled up with a black velvet tie, he could unfurl this object lesson of mission success in individual or group presentations. From the museum collection, Mennonite Historical Library, Goshen (Ind.) College.

Today marks the hundredth anniversary of the arrival of Mennonite missions in Argentina. On September 11, 1917, the families of T.K. and Mae (Hertzler) Hershey and J.W. and Emma (Hershey) Shank stepped off the S.S. Vauban in Buenos Aires, Argentina.  Shank had pursued a vision for mission outreach to Spanish-speaking people for over a decade. The Hersheys, inspired by the example of earlier missionaries to India, had first worked in a city mission in Youngstown.  The call to Argentina reached them in La Junta, Colorado where they had gone due to T.K.’s health.  In January 1919, after language study and scouting trips, the two families settled in Pehuajó, about 230 miles southwest of Buenos Aires.  Hershey later recalled that they were viewed as “foreigners, heretics, Protestants—despised, hated folks.”[^1] (Hershey. I’d Do It Again, 1961) In those early years, most of the Mennonite mission work in Argentina focused on evangelizing Catholics.  (See Hershey’s translation of the tract they distributed in Pehaujó during that first year).  In the Mennonite Historical Library at Goshen, we have many published and other resources to explore some of the many results of those first Mennonite steps on Argentinian soil: evolving approaches to mission, influence on outreach to Spanish-speaking people in Chicago, examples of collaboration and alienation, and much more.

In the last number of years, Mennonite churches and institutions in North America have paid particular attention to their relations with Muslims. They have sought to dispel suspicion and hostility between communities; terms like “friendship, hospitality, and dialogue” regularly accompany organized events that seek to create a common ground by emphasizing the values shared by Muslims and Christians. Rarely, however, do these events reach into the past to acknowledge the collective history of Muslims and Mennonites. In the Russian empire, these groups were neighbors: in Molochna, Crimea, Kuban, Terek, Ufa, Neu-Samara, Orenburg, Slavgorod, Pavlodar, and Aulia Ata, Mennonites settled next to established Muslim communities, who practiced a variety of nomadic, semi-nomadic, and settled lifestyles.1 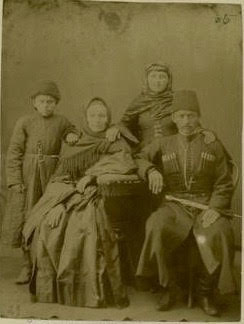 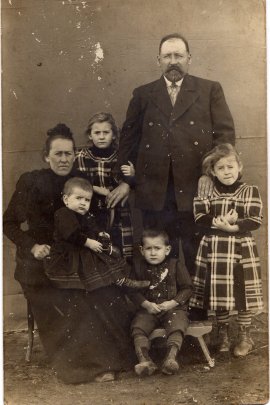 —A Kumyk family (left) and a Russian Mennonite family (right)

The Russian empire expanded at the expense of Muslims on its periphery. This was particularly the case in the Caucasus. By the mid-nineteenth century, Russia’s military conquest had transformed the Caucasus “from a contested frontier zone into a borderland of the Russian empire.”2 The violence that secured Russian rule left an indelible mark on the region, which would haunt relations between the state and the indigenous peoples as well as influence the lives of settlers. In the Caucasus, the Russian state’s actions initiated a clash between a colonial Christian empire and a local population increasingly united by a shared Muslim identity. Even though the local population at the time was incredibly diverse and highly fragmented (as it remains today), the interpretation of Russia as a Christian empire aggressively and without mercy annexing territories lingered in the region, arguably influencing relations on the ground.3

Mennonites decided, in the early twentieth century, to move right into the heart of this maelstrom, purchasing 66,950 acres of land from Princes Aleksandr and Konstantin Lvov for nearly a million rubles. This land was located between the river Sulak in the south and the river Aktash in the north. A map showing the ethnicity of the population in 1913 confirms the isolation of Mennonites. Located in the far reaches of the Terek province, near the Caspian Sea, Mennonites established a small enclave surrounded by various groups of Sunni Muslims, such as the Nogai, the Kumyks, and a little further away, the Chechens. Mennonites, however, were not the only Christians in the Khasavyurt district, as other German and Russian settlers also established villages.4 As Terry Martin has noted, Mennonites debated the decision to purchase this land on the basis of economic and health concerns; it did not cross their minds that Mennonite properties and lives might be jeopardized by their neighbors.5 This showed, perhaps, a strong belief in their own resourcefulness, or maybe they sincerely believed that the Tsarist state could keep them safe: either way, they were mistaken. My grandmother, who was born in Khartsch (village #2), could vividly recall the day her family fled their home, as her mother carried loaves of raisin bread to the wagon in her apron. Through the eyes of a child, this was an adventure—to her mother, a stressful event, as she frantically packed her children and belongings. My grandmother’s family, as well as the majority of the Mennonite settlement, fled in beginning of 1918, as anarchy spread through the region with the collapse of authority after the overthrow of the Provisional Government by the Bolsheviks.

It is important to interpret Muslim-Mennonite interactions through the lens of settler colonialism to show how the structure of settlement benefited Mennonites at the expense of the local population. It is equally as important to focus on the ways in which both Mennonites and Muslims participated in and instigated violence against each other, as they asserted control over land and property. In case of the Mennonites, this violence, at least initially, was performed by others on their behalf; however, as raids on their villages intensified,  some Mennonites chose to participate directly. As Martin notes, the Terek settlement foreshadowed the difficult choice that Mennonites would soon face in Ukraine: fight or submit humbly to the violence.6 In the Terek, they chose to both fight and flee.

Yet this is not the full story. Amid this chaos, there were moments when the values of friendship, hospitality, and dialogue joined Mennonites with their Muslim neighbors. As the raids on Mennonite villages intensified during 1918, Mennonites not only prayed for God’s mercy, they also approached some of their Muslim neighbors (the Kumyks) living in the villages of Kazi-Yurt and Kostek for help. The Kumyks sent representatives to a meeting held at the Mennonite Brethren Church in the village of Talma (village #3) to discuss the situation. They brought a detachment of the militia, which travelled to the neighbouring Nogai and Taulin villages to confiscate goods stolen from the Mennonites.7 These militiamen were then billeted in Mennonite villages overnight. When it became apparent that the settlement could not be saved, Mennonites fled to Kazi-Yurt and Kostek where they were welcomed by the local population and extended significant hospitality.8 Those who could not make it to these villages were helped by Muslim acquaintances to safety through alternative routes.9

These short vignettes are only snippets of a complicated story that has yet to be fully told. Despite the fact that this help saved Mennonite lives, Mennonites felt betrayed as their protectors asked for compensation. While I have no evidence, I’m sure that Muslims felt shocked by the ingratitude of Mennonites, who appeared to place the same value on their property as they did on their lives. Nonetheless, the example of the Terek settlement shows that even amidst violence, anarchy, and competing interests Mennonites relied on and benefitted from the kindness of their Muslim neighbors.