‘Tis the season to send and receive holiday greetings! While the missives of today often contain perfectly posed photos of the sender’s family, a century ago photographs had yet to make it to the mainstream since they were not as easily reproduced. Instead, holiday postcards contained lovely illustrations coupled with sweet sayings.

The Virginia Mennonite Conference Archives is fortunate to house the collection of Nora Hostetter, which contains some fantastic examples of these antique cards sent to her family and friends over a century ago. I have scanned a selection to share here and hope they give you a glimpse into holidays past. 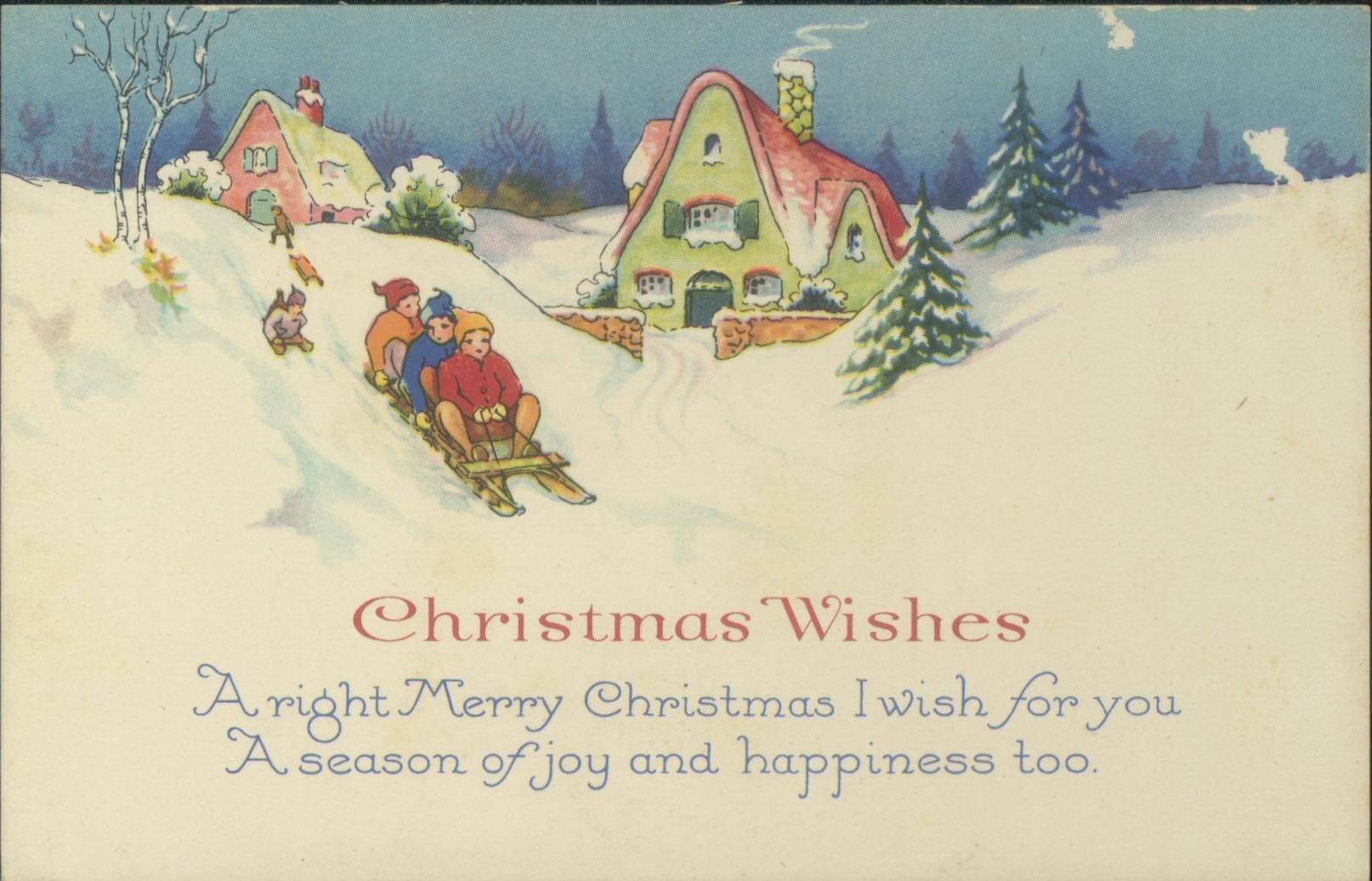 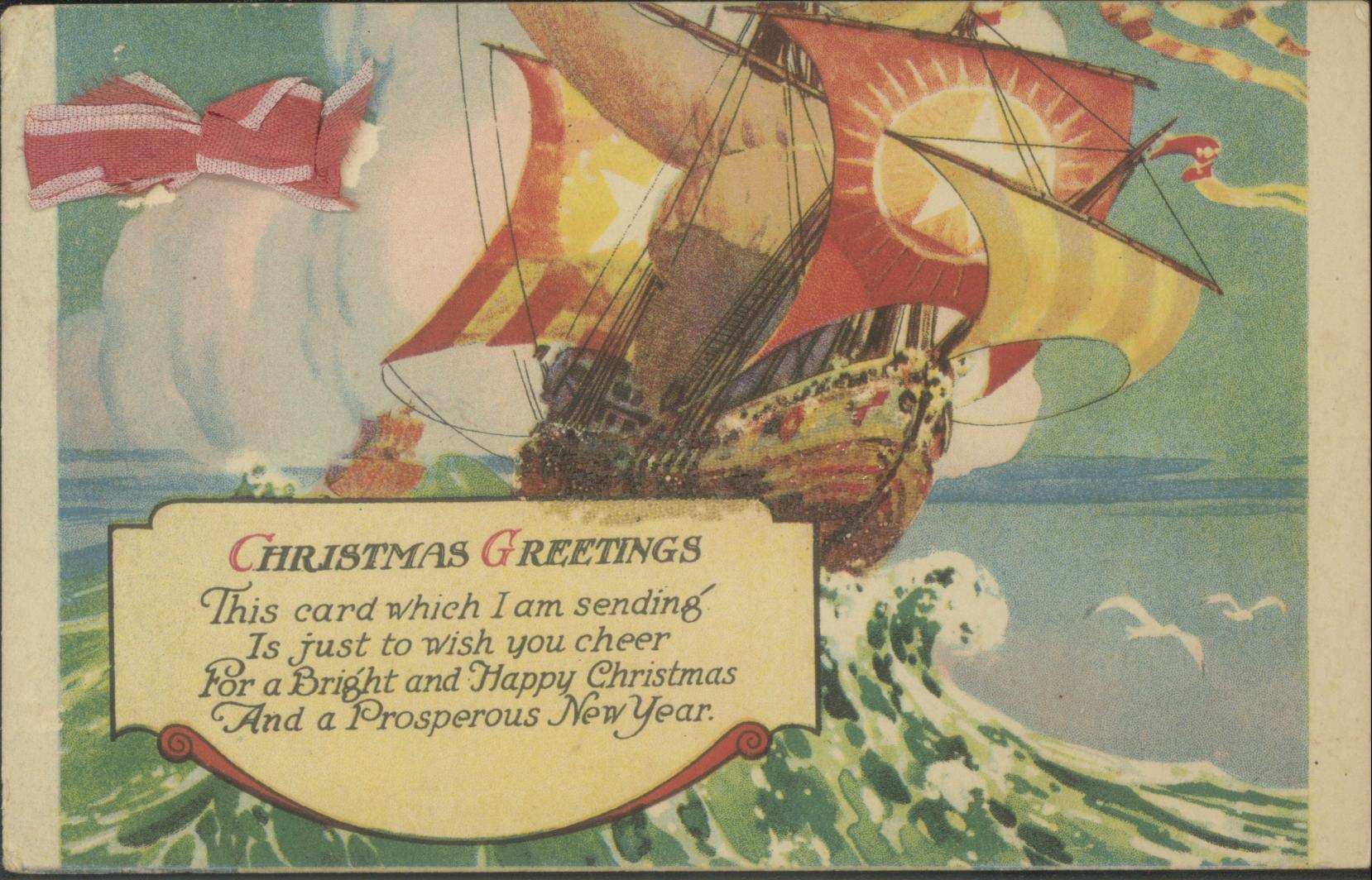 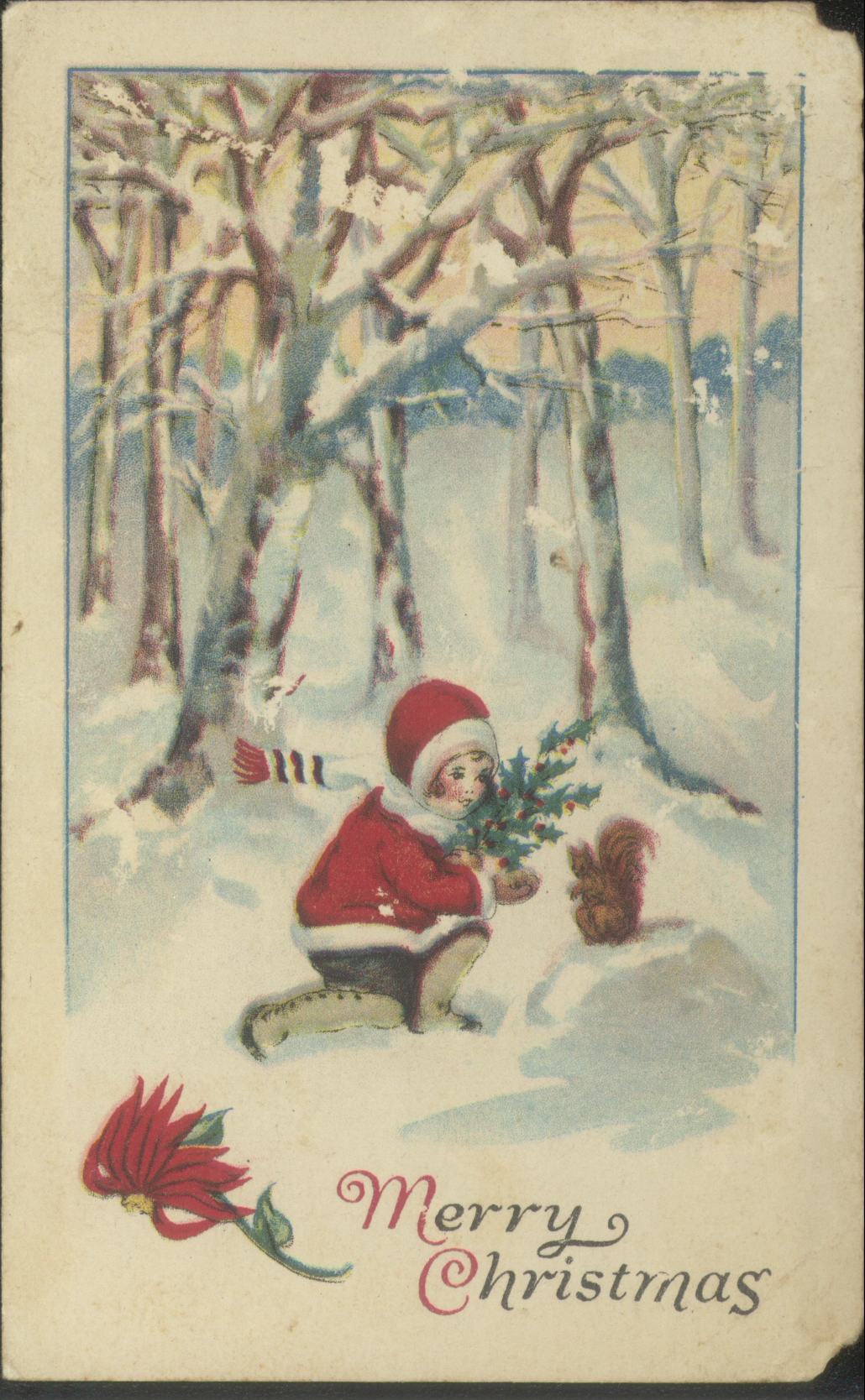 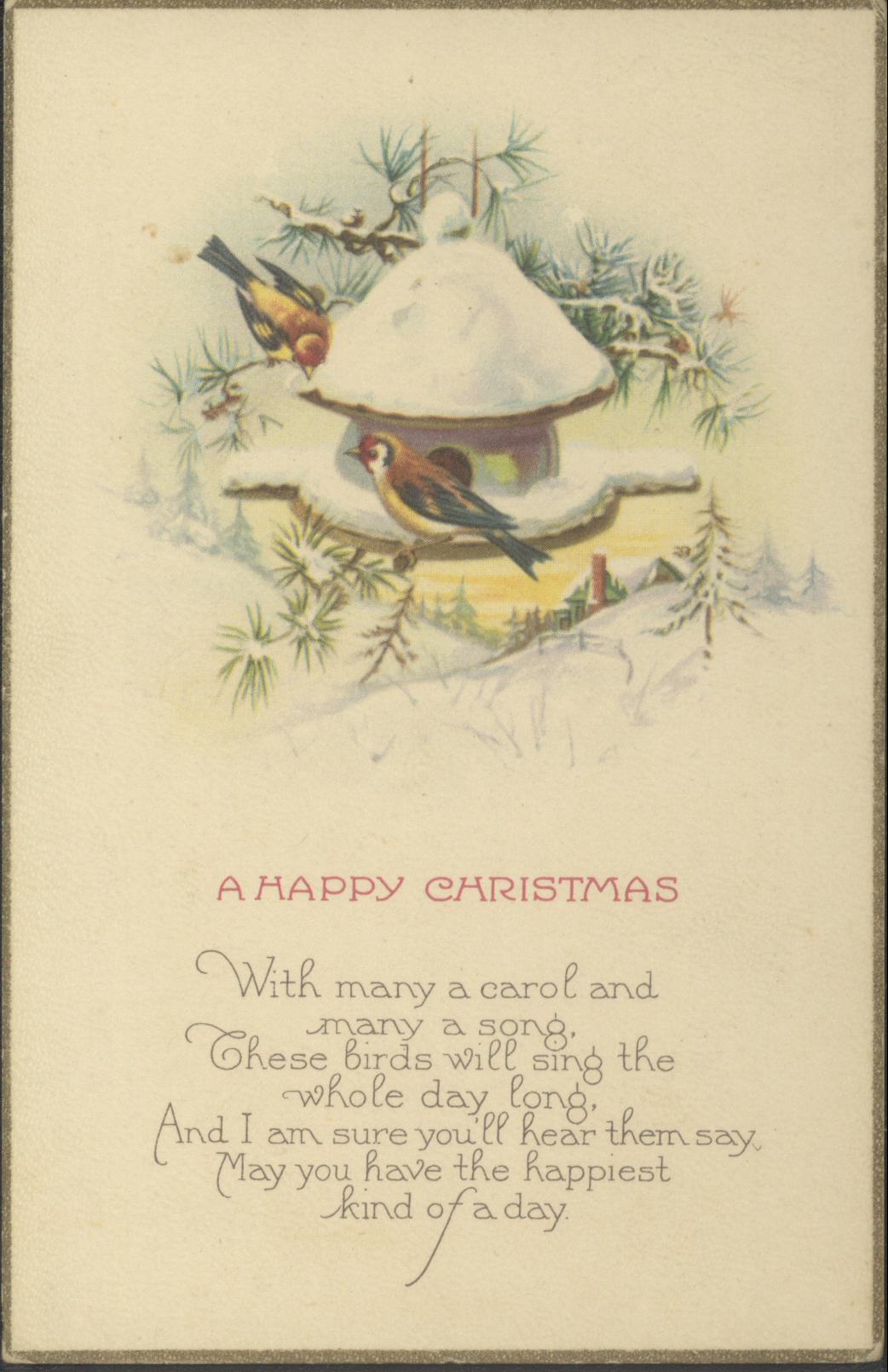 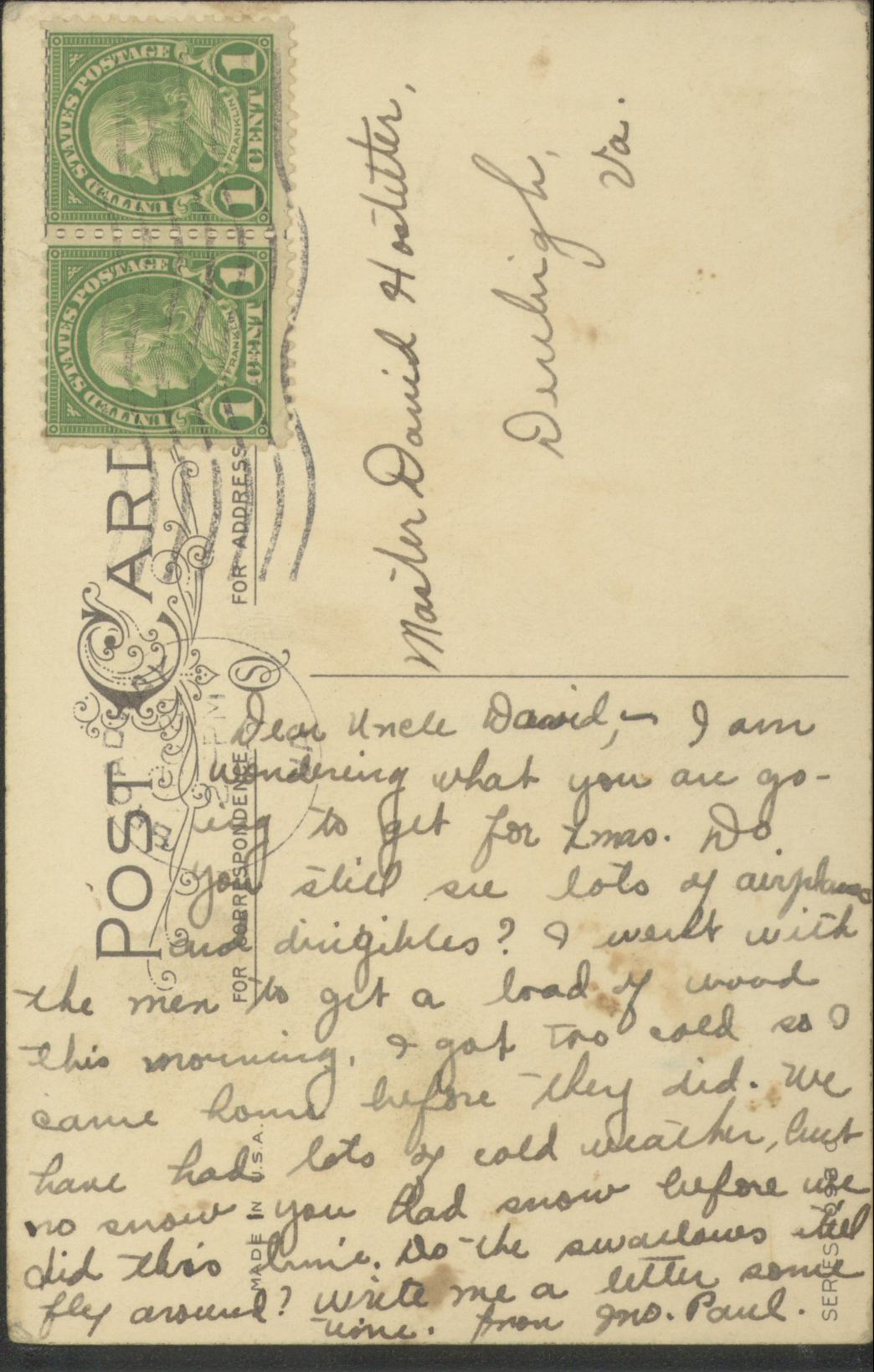 The message on this card gives a unique glimpse into the sights of the day, with John Paul asking his uncle David Hostetter whether he is still seeing “lots of airplanes and dirigibles” ( blimps) and if the “swallows still fly around” in Denbigh. 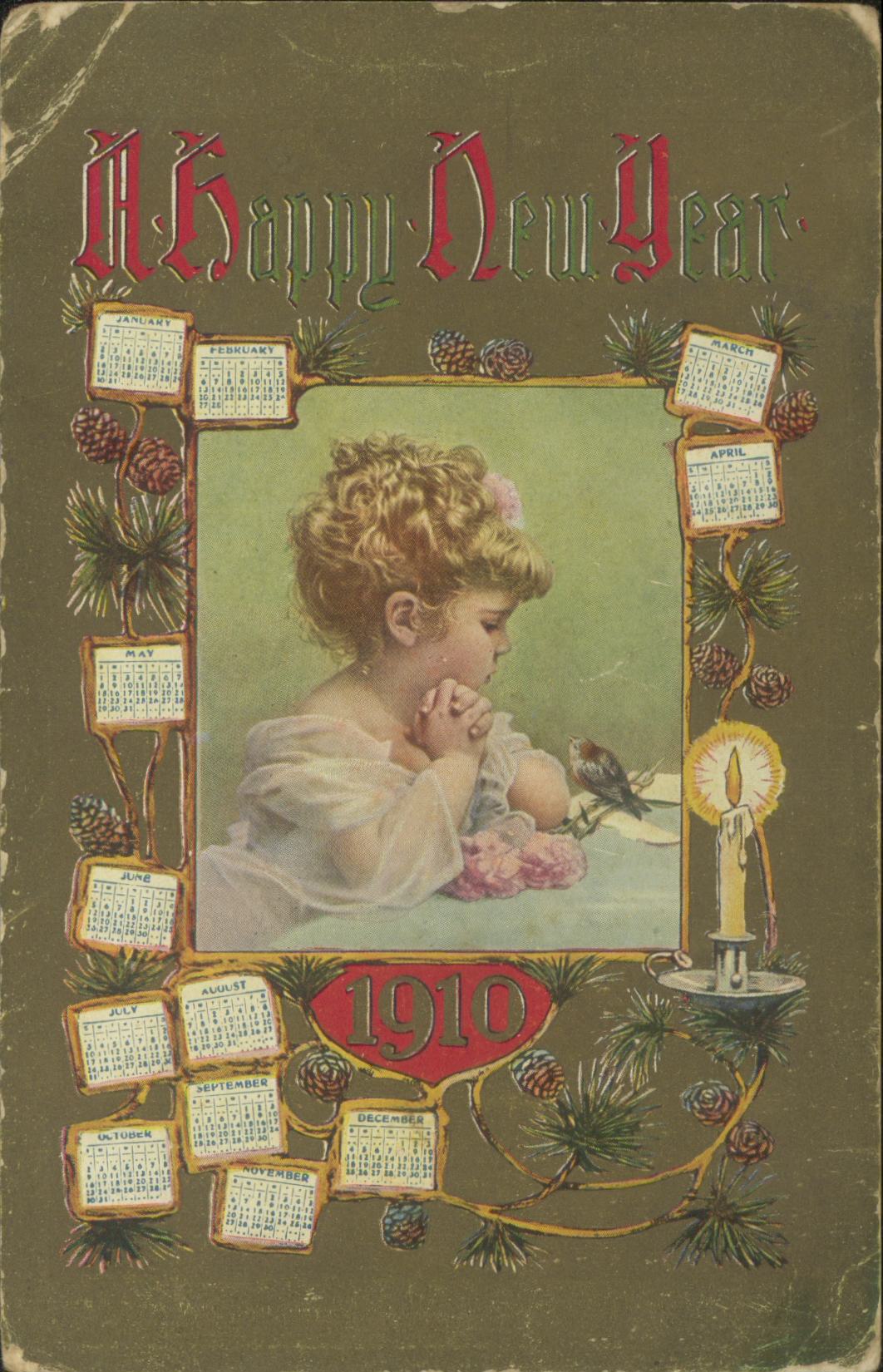 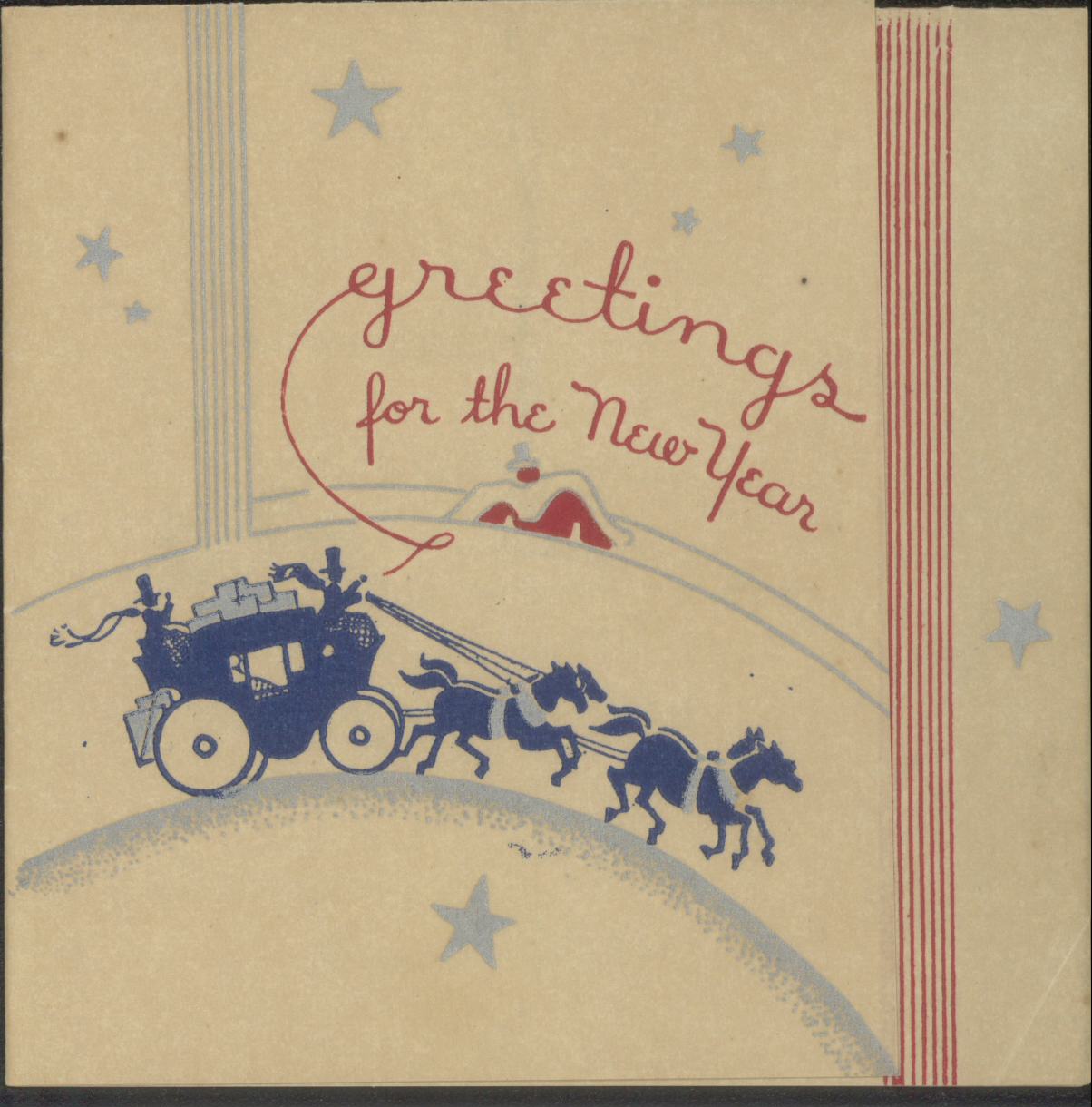 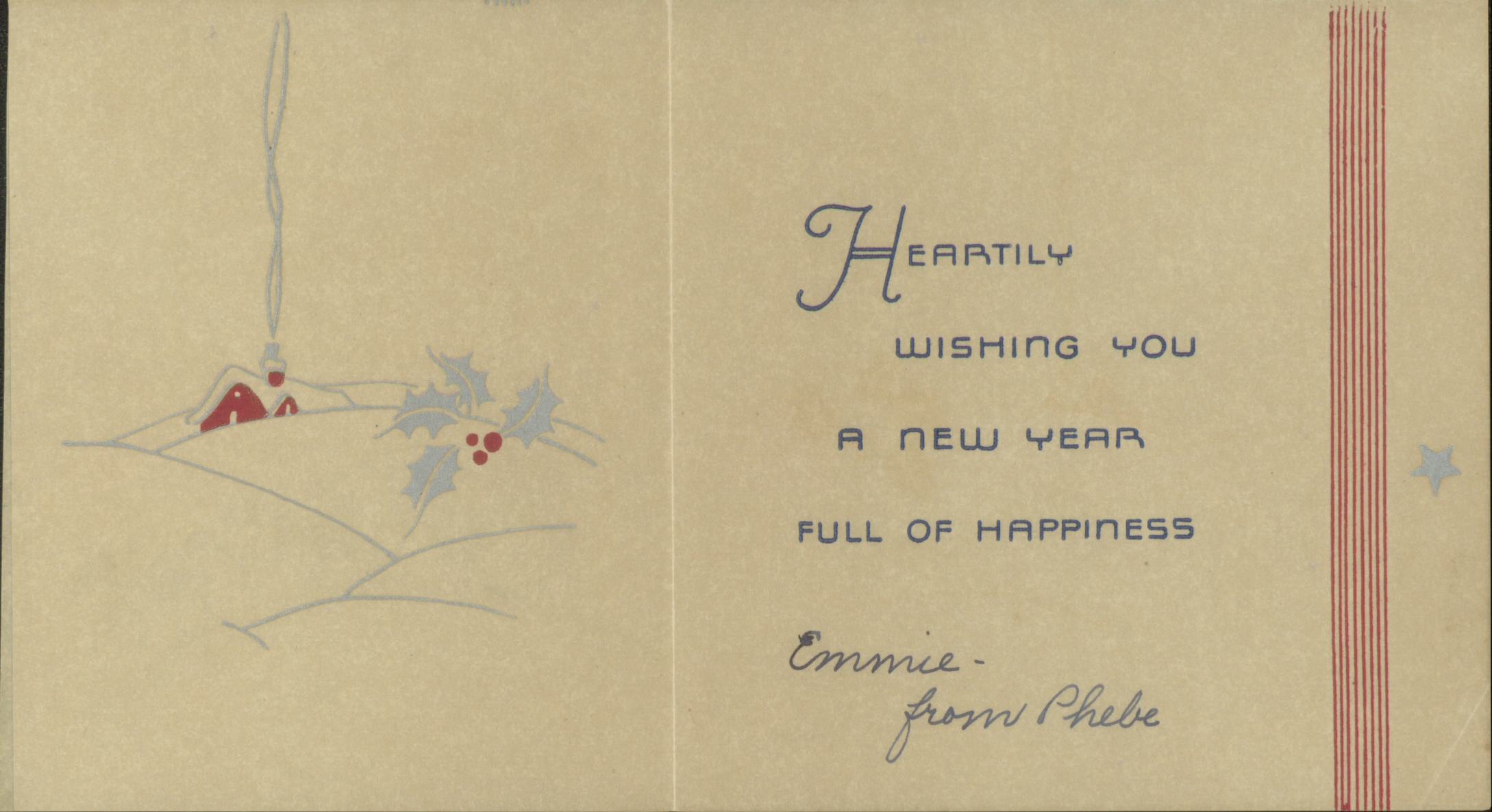 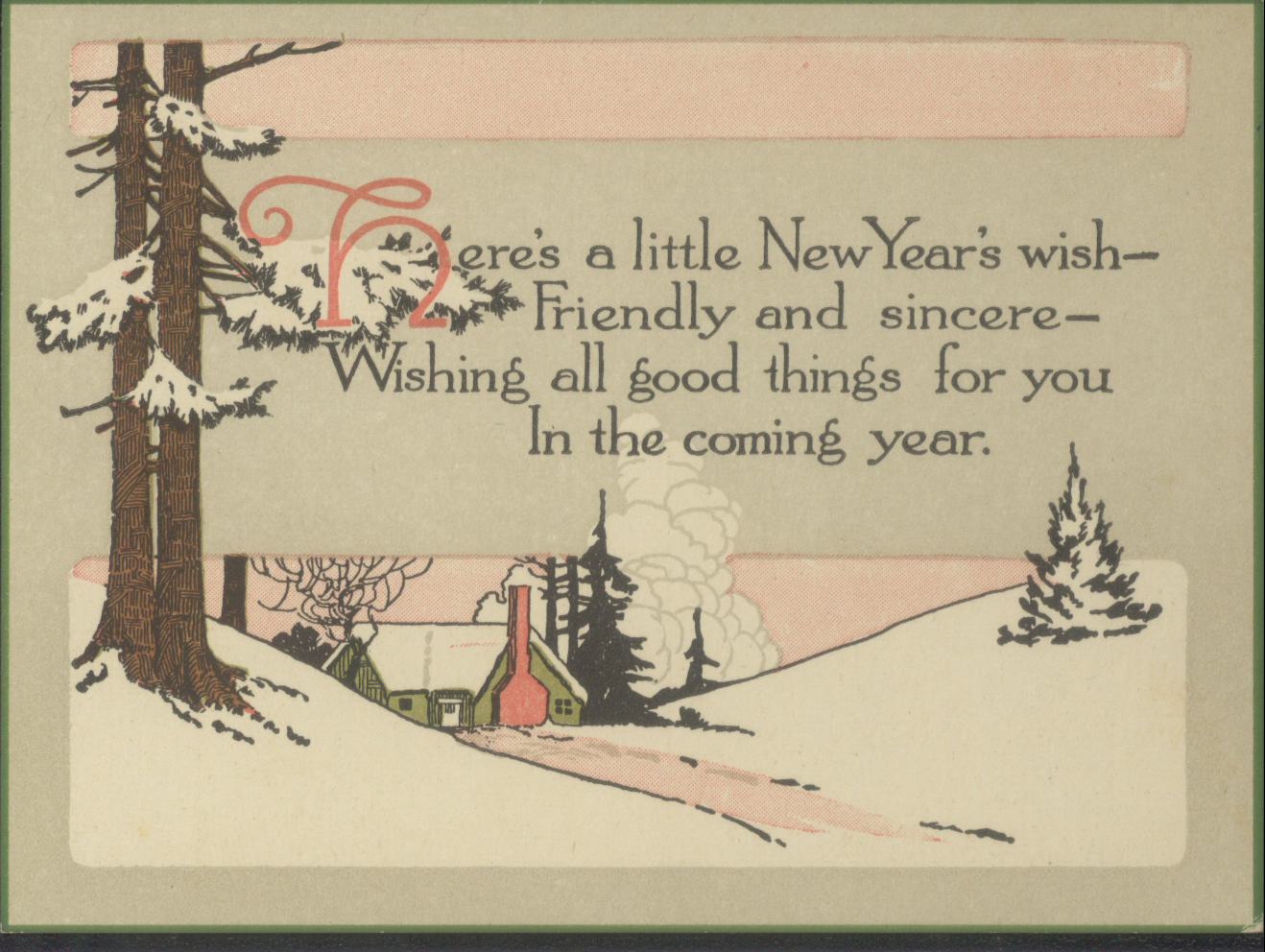 Merry Christmas and here’s to another year of discovering treasures in our historical collections! 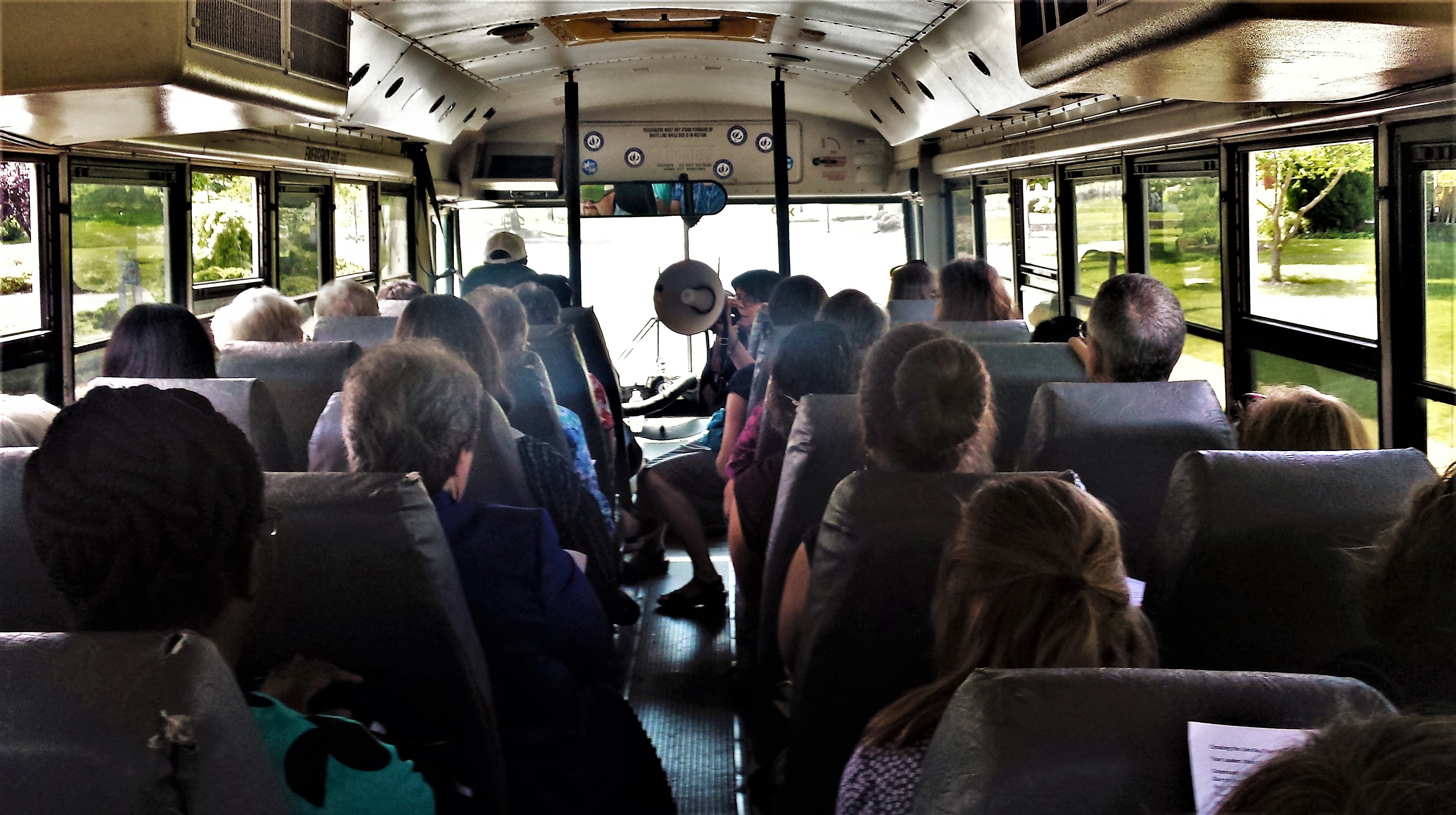 Conference organizer and professor of history Mary Sprunger organized a bus tour of Anabaptist historic and cultural sites in the Shenandoah Valley for Crossing the Line participants. 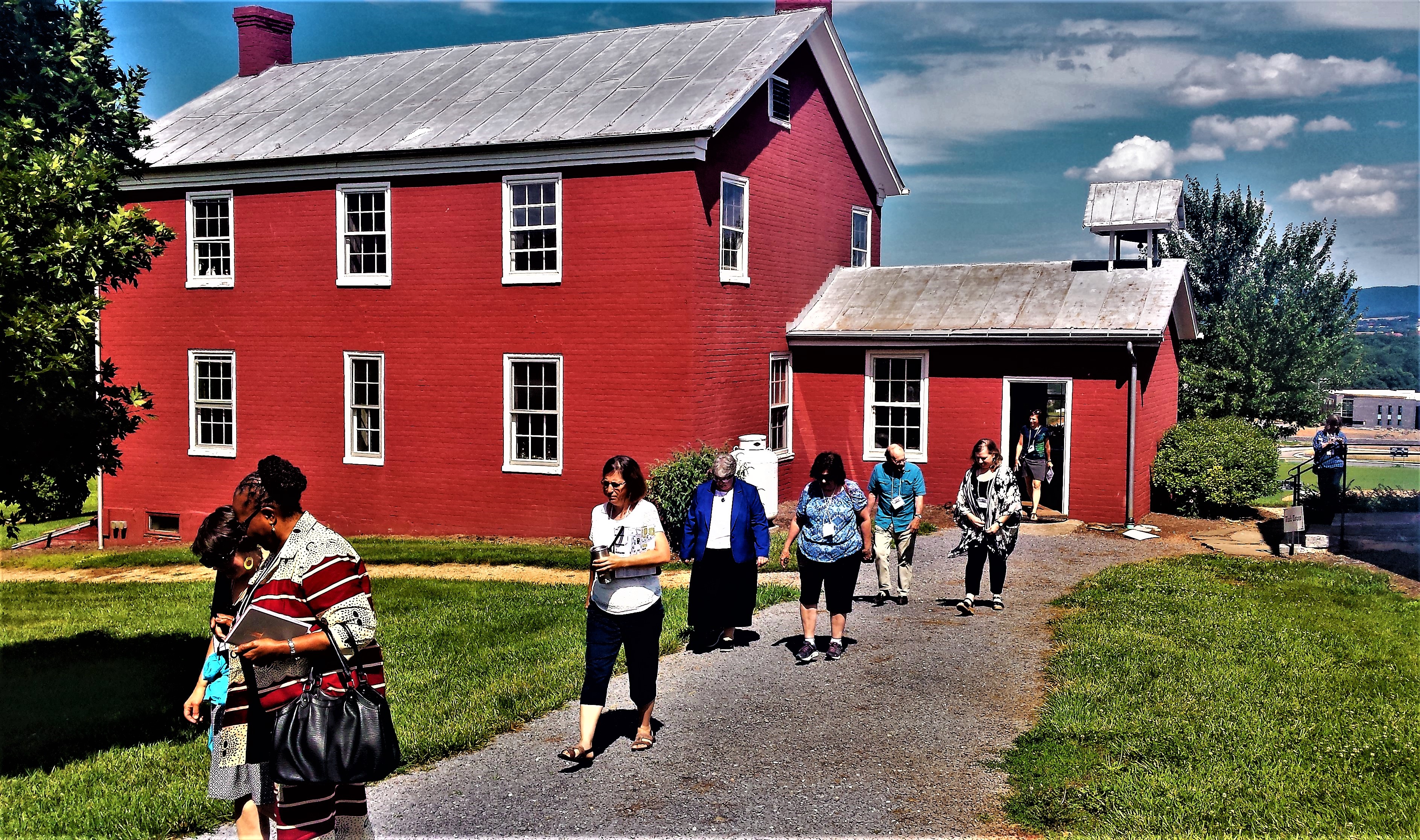 The first stop was the Burkholder Myers House (built 1854), where participants heard from Ruth Stoltzfus Jost about her family’s role in the Underground Railroad as well as about her mother, Ruth Brunk Stoltzfus, who at the age of 74 became the first woman to be ordained in the Virginia Mennonite Conference (1989). 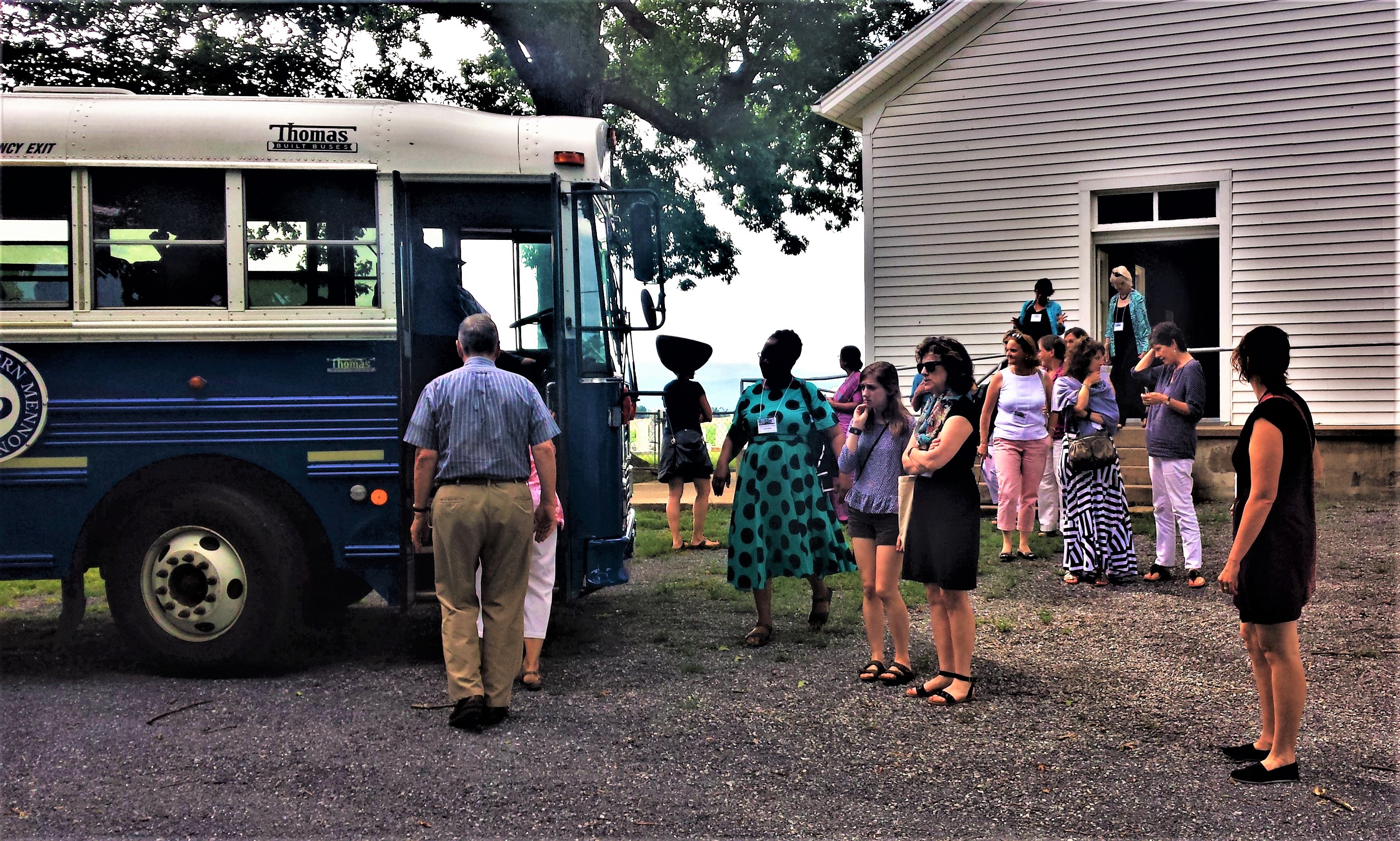 Following a stop at the Hickory Hollow School of the Weaverland Old Order Group, the tour visited this Old Order Mennonite Church, including lively Q and A with Minister Lewis Martin. 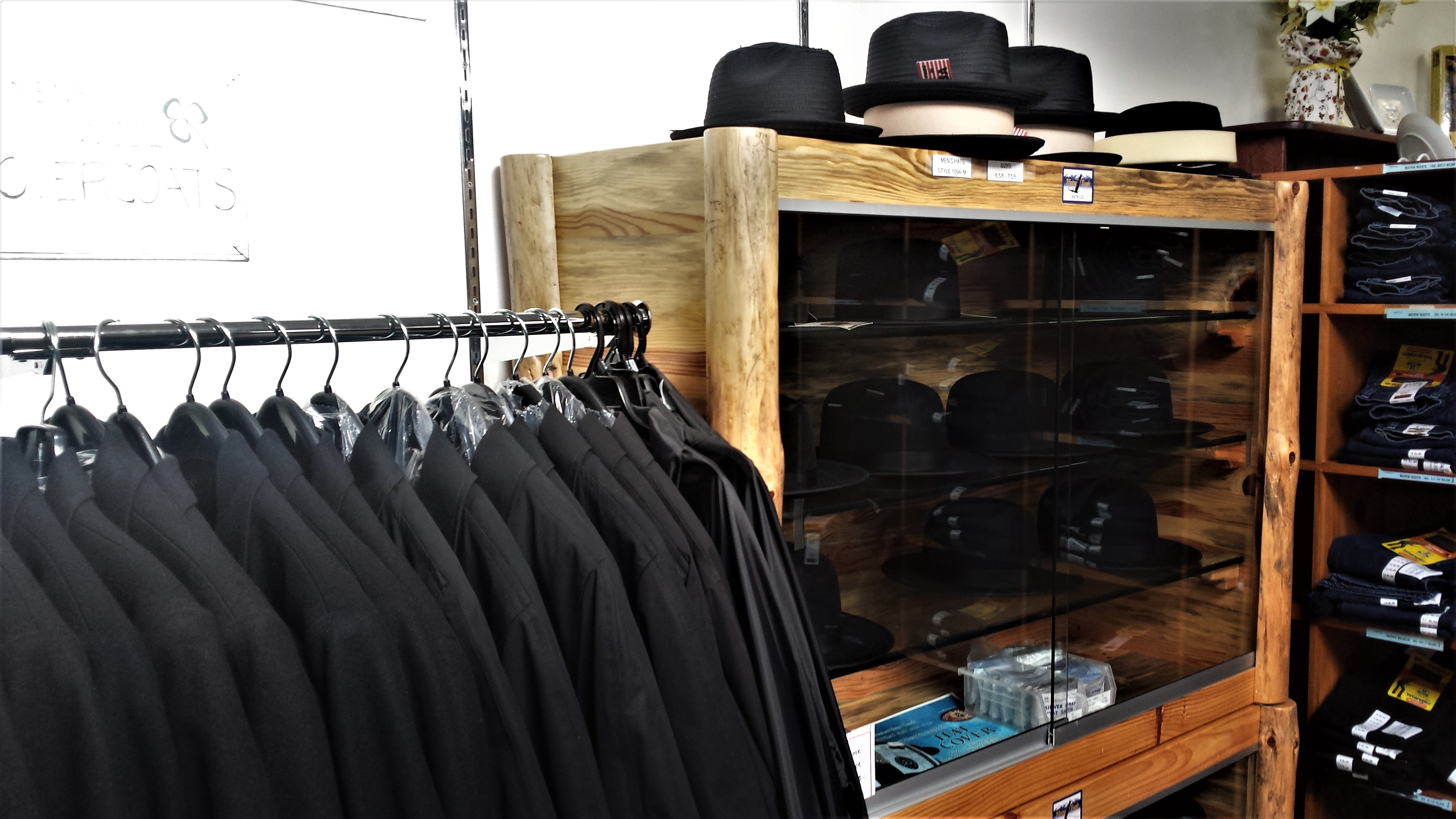 Sisters Ruth and Etta Showalter run the Rocky Cedars Store which sells goods such as these hats and broad coats to customers from the Shenandoah Valley’s three different horse-and-buggy Anabaptist groups. 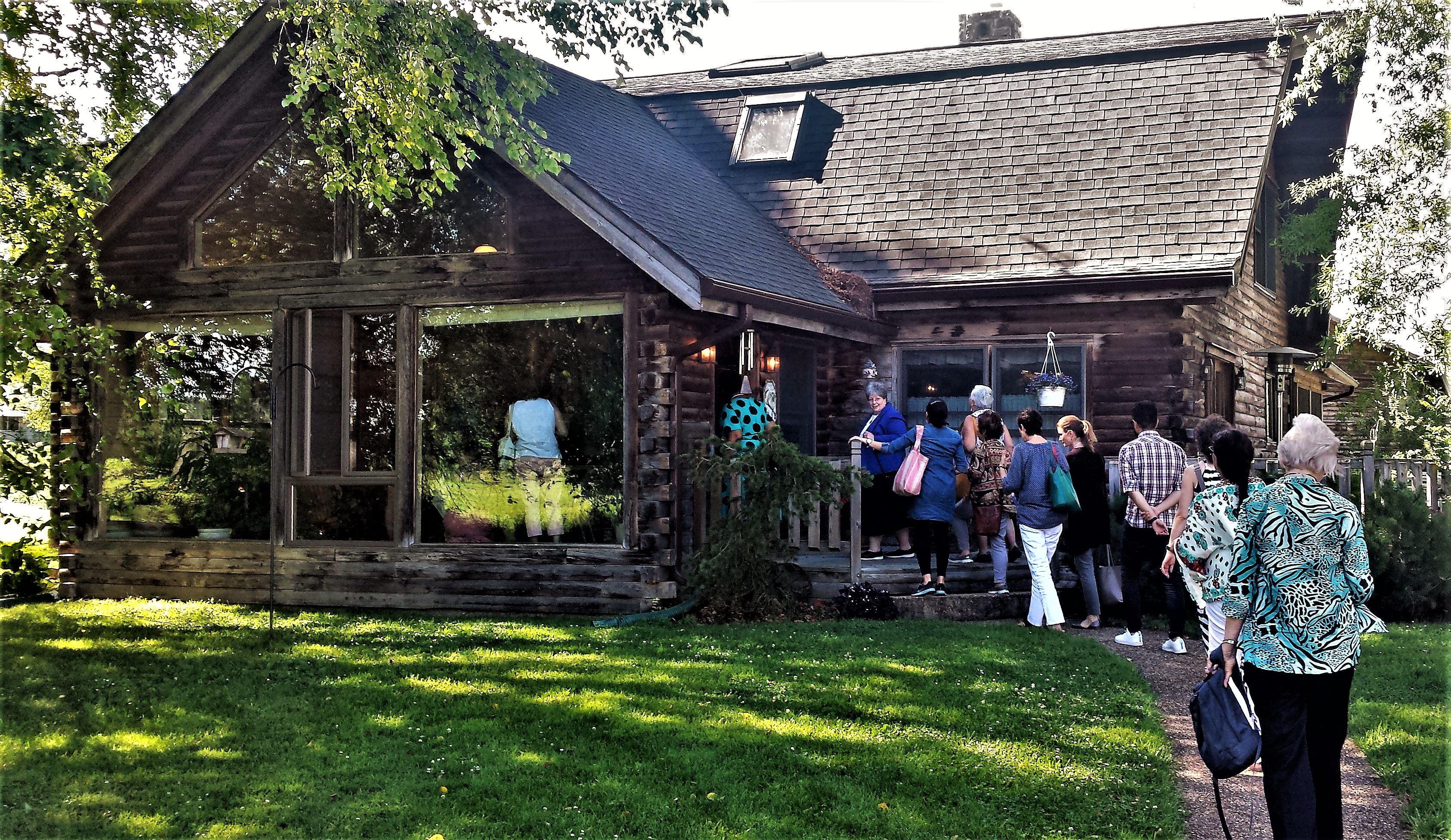 The tour concluded with a delicious meal at the home of Old Order entrepreneur Janet Shank, whose business is to cater dinners with the help of her family and neighbors.

I grew up in a Mennonite community that did not recognize women in positions of church leadership.  As times changed, I assumed that my sisters and I were the first generation of women in our family to imagine that our calls to ministry might be affirmed and even ordained by the Mennonite Church.  Imagine my surprise when my dad discovered that my great-great-great-grandmother, Elizabeth Shank Showalter, was ordained as a deaconess in 1889 to the Middle District of Virginia Conference!  As much as I celebrated the rediscovery of my deaconess matriarch, I also learned that church polity, influenced by a renewed zeal for doctrinal conformity, significantly confined the role of the deaconess, eventually making it obsolete. 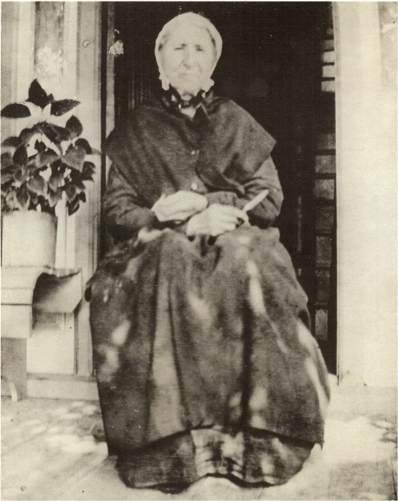 Deaconesses were an anomaly in the (Old) Mennonite Church except for in the Middle District of Virginia Conference, where around 28 women were ordained as deaconesses loosely between the years of 1861-1962.1  Deaconesses were appointed to assist ministers in providing for the pastoral care and physical needs of women and girls and to help facilitate services of baptism, communion and footwashing.2  The role of deaconess, at its best, offered women an outlet for meaningful (albeit modest) ministry in the church complete with public affirmation through ordination (of a kind).  However, as power consolidated around conferences and Bishops, Mennonites began emphasizing doctrinal and behavioral uniformity.  As a result, the role of deaconess was significantly curtailed to focus heavily on monitoring women’s dress and behavior.

Mennonite historians have amply documented increases around the turn of the century in ordered organizational structures in conferences, which consolidated power to Bishops and enforced order in doctrine, dress, and congregational life.3  This institutionalization was part of an attempt to secure and clarify Mennonite identity so that it could withstand the challenges of a modern era.  Maintaining doctrinal and behavioral compliance was a struggle, however.  In 1919, the Middle District of Virginia Conference reported that out of its 700 members only 100 men and 175 women “conform to the regulations of the church.” Leadership addressed this problem, saying, “We need to redouble our energy.  We need to hold to the…jot and tittle and it is necessary to place more emphasis on this subject now since the world is against it.”4

The responsibility for holding women to the “jot and tittle” fell to deaconesses.  Their work increasingly consisted of “visiting women and girls, members of the church who were out of line in dress, morals and conduct.”5  Holding the line included ensuring that other women were dressed properly, particularly for communion and baptism, sewing suitable garments for converts in mission posts and “visiting” (a euphemism for correcting) those who did not comply.

Some deaconesses fully embraced their role in holding the line. Deaconess Betty Keener believed wholeheartedly in the importance of the bonnet and plain dress.  A missionary with her husband in West Virginia from 1909-1912, she sought to bring the women there into compliance with Mennonite standards of dress.  She was appalled to learn that “fault had been found” in a convert who ceased to wear her bonnet because she didn’t feel comfortable being the only woman her community to do so.  The woman was seen in “one of those big straw hats and jewelry.” The sister in question “flew off the handle” when confronted and said, “ If you can’t carry me as I am, scratch my name off the book.”  Betty expressed her disappointment.  “How could she?  How can it be possible for her whom we thought consecrated to fall away so soon?  What has done it?”6

Other deaconesses, however, had more empathy with the “transgressors” and felt the burden of enforcing standards.  Frances Suter Harman, daughter of deaconess Pearl Suter, recalled impressions of her mother’s ministry in the 1930s and 40s.  “The deaconesses of those later years often felt that their duties were becoming onerous, as they tried to hold the line with the rules for the dress of the women.  They did this for the bishops who felt they should not become involved in overseeing that the women and girls were dressed properly for baptism and communion.”7  Another daughter remembers feeling how much her mother worried about the task of visiting sisters who had fallen into sin—a task assigned by church leadership as hers to “deal with.”

By the 1940s and 50s, as the work of the deaconess became more “onerous,” fewer deaconesses were ordained, and finally in 1962 the Middle District Ministerial Council decided that the wives of ordained men would perform the duties of deaconess but without title or ordination.  In her study of Virginia Conference deaconesses, Ruth Lehman suggests that the ministry of deaconesses had “become so mundane that the vision of the possibilities for the office in the life and growth of the church were no longer seen.”8  Someone still needed to bake communion bread, wash out basins for foot washing and attend to women’s needs in the church, but the role of deaconess had become so confined to upholding discipline that there was no longer vision for a recognized ministry role for women in the church.   The ministerial council decided that pastors’ wives should take over these tasks.  Thus, church polity, with its solidifying institutions and insistence on doctrinal and behavioral uniformity, first curtailed the role of the deaconess before finally phasing it out.

Thus, church polity, with its solidifying institutions and insistence on doctrinal and behavioral uniformity, first curtailed the role of the deaconess before finally phasing it out.

The story of my deaconess great-great- great-grandmother was completely forgotten by my family until my dad stumbled across it while doing family research.  We are surprised that my grandpa, a knowledgeable Mennonite historian, never told us about it.  His cousin compiled the deaconess list at the archive so surely he would have seen it.  We will never know if Grandpa didn’t know about his deaconess great-grandmother or if he chose not to talk about it because of his opposition to women in leadership.  In any case, those of us who know about Elizabeth Showalter and the deaconesses of Virginia Conference have the opportunity to remember forgotten leaders of our past and to be aware of how church polity continues to affect marginal leaders in our own day.

Today women serve in a variety of roles in Virginia Mennonite Conference and are ordained as pastors.  Concerns about holding to the “jot and tittle” no longer pertain to plain dress, but issues of authority, decision-making, compliance and discipline continue to affect leaders in minority positions.  Are negotiations between ministry on the margins and conference polity once again “onerous?”  The future of a viable ministry for leaders in minority positions may depend on the answer to that question.