As young students in their early 20s, J.D. Graber and Minnie Swartzendruber thought they were headed toward careers as educators. A new set of correspondence at the Mennonite Church USA Archives sheds light on their early lives, their courtship, and their decision to serve as missionaries in India. The mostly handwritten letters between the two span a period of four years (1921-1925) and contain rich details about their family life, social networks, educational pursuits, and Mennonite faith.

About the decision to serve in India, J. D. wrote, “I’m absolutely sure if we make this a matter of earnest prayer God will take care of all difficulties and will open the door for us to go if He wants our lives in India.” In her letter of response, Minnie wrote that God’s strength gave her courage “and makes me willing that our comfortable little home in some college town should fade away. Such is alluring to a young lover’s eye but God forbid it should blind our eyes from the realities of life, the responsibility to be met, and the joy of doing it.”

After seventeen years in India, J. D. later served as the first full-time general secretary of the Mennonite Board of Missions from 1944 to 1967. Minnie was the president of the Women’s Missionary and Service Commission from 1950 to 1959 and spoke widely throughout the church. The collection also includes diaries and journals, sermon notes, and a series of published and unpublished manuscripts that J. D. authored over the course of his career.

Lines of Memory and Encounter on the ‘Mission Field

Three presenters gave papers focused on women on the “mission field”—either those serving as missionaries, or being missionized.

‘I Was the Kind of Woman Whom the Culture Expected’: The Experience of Mennonite Missionary Women in Ethiopia 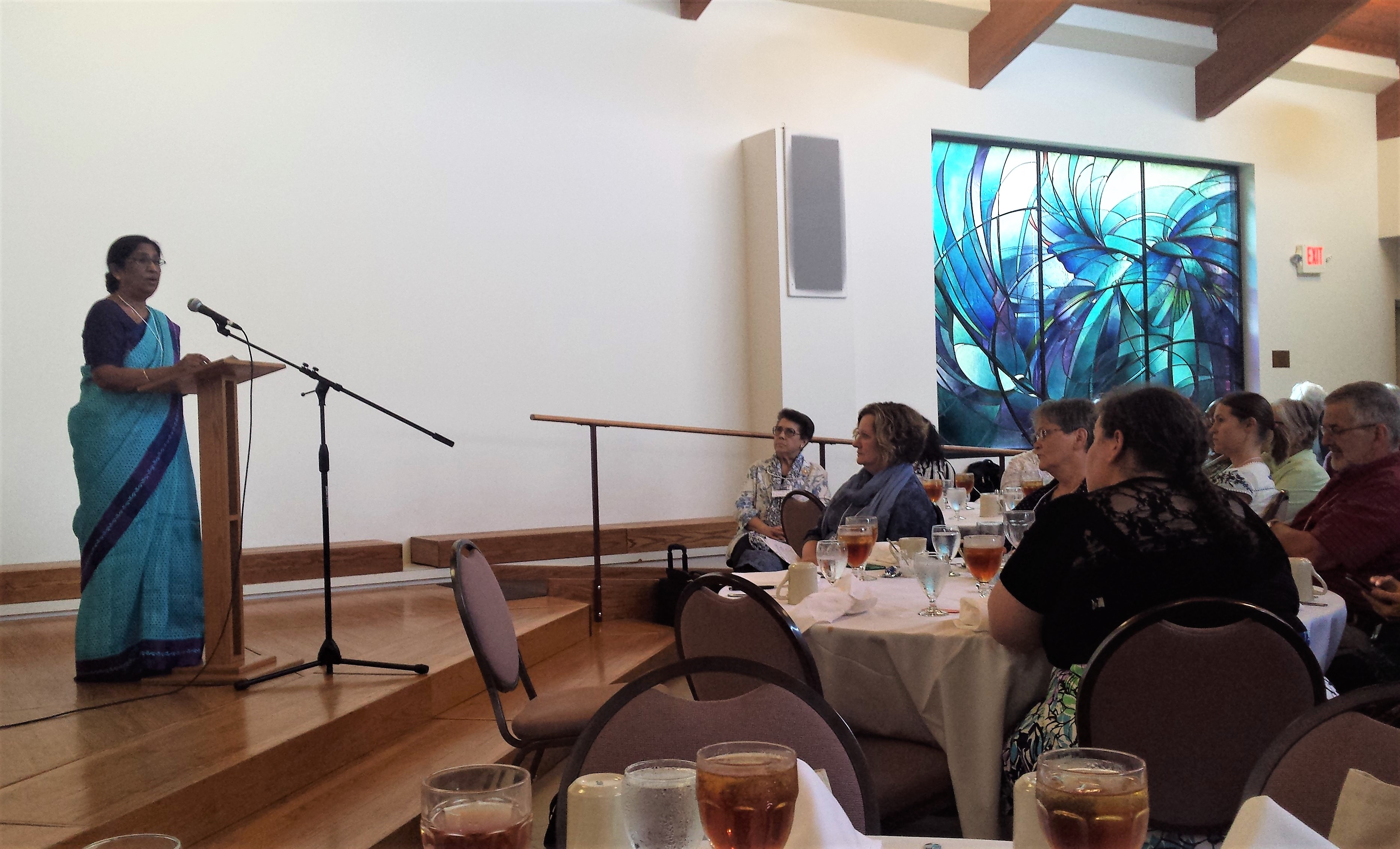 Cynthia Peacock, the second keynote speaker at Crossing the Line, gave a warmly received talk on the achievements and challenges of Anabaptist women in India. Cynthia spoke from her decades of ministry experience in India, first with Mennonite Central Committee in India and then with the Mennonite World Conference. She began her talk by describing a challenge faced during her work: how could she, and the women she worked with, build bridges across the boundaries they encountered?

She shared stories of two women in India who served as role models early in her work. The first, Pandita Ramabai, was a high-caste Hindu woman who converted to Christianity and became a Bible translator and worked to uplift women of lower caste. The second, Mother Teresa, was someone Cynthia worked with personally, as part of her work with MCC in Calcutta. Cynthia shared stories of how Mother Teresa fearlessly overcame boundaries and asked government officials for support of her relief work.

Cynthia then went on to tell stories of some of the setbacks she and other Indian Anabaptist women encountered as they tried to take on more active roles in their churches and denominational structures. For example, she and a group of women spent three years working on a constitution for an independent women’s group within the Anabaptist church hierarchy in India. They had received some support from male church leaders, but when the leadership changed they were completely unsupportive of the endeavor, and even physically destroyed the copy of the constitution the women had brought to the meeting.

She also spoke of her efforts to provide Anabaptist women in India with theological training. These efforts did not always have the full support of male church leaders. In one instance, Cynthia and other women tried to organize a women’s conference, and the male official in charge of a final logistical detail failed to fulfill his responsibilities, which caused the conference to be postponed indefinitely.

In addition to stories of setbacks, she told of women’s successes as they played more active roles in churches. Cynthia’s own church grew from a five-member house church to a much larger church with a Sunday School serving over a hundred children, in large part because the women of the congregation were free to use all their gifts in service of the church. The women in her church organize programs, preach, lead worship, and have an important voice in matters of church governance.

She ended by sharing how she had overcome barriers in her own life. God’s help, and the help of supportive friends, have strengthened and empowered her through the difficulties she has faced over the course of her own life. With God’s help, she overcame fear and shyness and began to share her story as she ministered to other women. She gave glory to God for all that has happened in her life. Indeed, she concluded, John 5:5 and Philippians 4:13 have proved true in her life. Apart from God, she could do nothing, but she can do all things through Him who strengthens her.