What do the Anabaptists from Prussia, cowboys, and Eastern Mennonite College have in common? Admittedly not much, but these three threads have intertwined in a unique way throughout history to weave a tale of conflict, connection, and caring.

The first thread is the Anabaptists in Danzig, Prussia (now Gdansk, Poland). The history of the Danzig Mennonites is long and complex and there isn’t enough time or space do it justice here, but I will attempt to give a brief overview.1 Anabaptists moved to the Danzig area in the 1530s fleeing persecution in the Netherlands and other areas of what is now Germany and Switzerland (Mannhardt 2007, 37-38). They established a community in Danzig, living there from the 16th century to the early 20th century.  Both Menno Simons and Dirk Philips visited the Anabaptists at Danzig a number of times, with the latter living there for a while. Danzig church historian H.G. Mannhardt says that “the beginnings of our church can be traced to Menno himself” but that Philips “is considered the actual founder of the Danzig Mennonite Church.”2
The Danzig Mennonites practiced strict church discipline, tried to avoid fashionable clothing, and were excused from military service so long as they paid for two substitutes. They also practiced mutual aid and care for the poor. They maintained an alms house to house the homeless and had an alms fund for the care of needy church members. Mannhardt says that “their care for the poor was to be similar to that of the early Christians, and for that reason they had, besides the office of preacher, the office of deacon or caregiver to the poor.”3

The Mennonites were appreciated for their work ethic and quiet nature, but they still experienced some discrimination. For the first few centuries of their tenure they were denied the rights of citizenship as they refused to take the citizenship oath, were not allowed to live within the city walls (many settled in the nearby suburb of Schottland), and endured hindrances to practicing their crafts and trade in lace and fine liquors. Seemingly each time a new King of Poland came to power he would try to evict them.4 Fortunately, they were given enough protection by the Danzig City Council to be able to continue living in and around Danzig.5

By the 1800s Danzig Mennonites were granted citizenship along with other protections and were able to move within the city walls, where they constructed a church building on what became known as Mennonitenstrasse (Mennonite Street).  Church membership was always strong and had grown to over one thousand after World War I, but it dwindled significantly after World War II as many were driven out by the conflict and subsequent Soviet occupation.6  The church building was restored after the war and continues to serve as a church, although it is no longer used by Mennonites.7

The second thread is post-World War II relief work done by young men of Mennonite, Church of the Brethren, Brethren in Christ, Quaker, and other Anabaptist faiths. Mennonite Central Committee (MCC) was instrumental in overseeing and coordinating the Anabaptist connection to governmental conscientious objector (CO) programs during and after the war, including Civilian Public Service (CPS) and the United Nations Relief and Rehabilitation Administration (UNRRA).8 After WWII, the UNRRA partnered with the Heifer Project, a Church of the Brethren organization, to provide livestock for people in Europe and China whose lives and livelihoods had been destroyed during the war. The men who volunteered to accompany heifers, horses, mules, and other livestock across the ocean were nicknamed “Seagoing Cowboys”. In total they made over 350 trips over the course of three years.9 Many went over as a fulfillment of their alternative service, but some were just seeking adventure. All came back with a deeper understanding of the gravity of pain and destruction endured by the survivors of WWII.10

The final thread is that of Eastern Mennonite College (now Eastern Mennonite University), more specifically its special collections library, the Menno Simons Historical Library (MSHL). The MSHL was started in the 1920s by two professors who wanted to create a collection of materials related to Mennonite and Anabaptist history, life, and culture. Since its inception, the collection has grown to include a number of rare books and materials relating to the early Anabaptists in Germany, Switzerland, and the Netherlands. It now holds over 45,000 books, including about 5,000 rare books, and a host of other materials related to the Mennonites and Anabaptists. 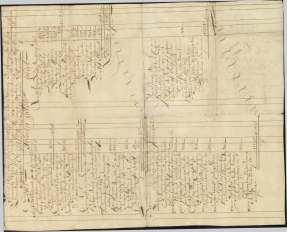 These threads were woven together when a young man from the Shenandoah Valley named Wilbur C. Layman went over to Poland as a seagoing cowboy in 1946. His fellow cowboys went out one day to explore the ruins of the bomb-damaged Danzig Mennonite church, but Wilbur stayed back as he wasn’t feeling well. The men found church records and documents in the damaged church, many of which they recovered and brought back to the United States.11 These were housed at the Mennonite Library and Archives at Bethel College in North Newton, Kansas from 1947-2009 (they have since been transferred to the Mennonitische Forschungsstelle in Weierhof, Germany).12 Although he had stayed back that day, two items found their way into Wilbur’s hands and were brought home to Virginia. He later donated them to the Menno Simons Historical Library–a 1908 songbook from the Danzig Mennonite Church entitled Gesangbuch zur kirchlichen und häuslichen Erbauung : für Mennoniten-Gemeinden and a single page entitled Rechnung von unsrer Gemeinte[sic] Armen Gelder : welche anno 1698 adÿ 29 December geschlossen worden, which very roughly translated means, “Account of our community poor funds which concluded December AD 1698”. This page lists the deacons for the poor that are mentioned in Mannhardt’s history of the church as well as an account of the alms fund. The deacons listed are Martin Enken, Harman Allerts, Hendrick Klaassen, Andries Penner, Gerrit Jansen, and Nicolas Penner. This document is a fantastic example of the mutual aid and care for the poor practiced by the Danzig Mennonites.

Documentary evidence such as this provides a tangible connection to history that is hard to replicate through reading facts and figures. Every rare item in the Menno Simons Historical library has a unique provenance, but we aren’t fortunate to have such a complete and fascinating tale for them all, which makes this document and songbook all the more special.