Originally exhibited at the Regier Art Gallery, Bethel College, North Newton, Kansas, October 30 to December 4, 2015. Excerpted from an article of the same name in Pennsylvania Mennonite Heritage 41 no.1 (January 2018): 10-29

Jan Luyken (also spelled Luiken) was born in Amsterdam into a middle-class family led by a school-teaching father who was devout in faith and committed to intellectual study. After his formal schooling, Luyken apprenticed in the workshop of a local painter, Martin Saeghmolen, and then learned etching and engraving from printmaker Coenraet Decker. He also met regularly with a group of friends, who called themselves De Wijngaardranken (The Vine Tendrils), to write poetry. In 1672, at the age of twenty-three, Luyken married Maria den Oudens. Of their five children, only their son Caspar survived childbirth. At the time of their marriage, Luyken joined the Anabaptist movement at his wife’s instigation, but he did not fully commit until having visions and experiencing a powerful religious conversion in 1673. Luyken remained committed to the Anabaptist church and to piety for the rest of his life.

Following Luyken’s death in 1712, fellow artist Pieter Sluiter etched Luyken’s portrait, shown at left, and published it together with a six-line poem by Adriaan Spinniker that encapsulates how his contemporaries viewed him:1

The desire for God and good deeds, which burns in LUIKEN’s heart
Shown in his behavior, and etchings, and poetry,
Spread thus its glow in the modest countenance,
Which gaze made each aspire to share his way of living.
Thou, who dost always view and read his work with pleasure,
Look frequently at this face, as incentive for thy spirit.

Although he is known predominantly in today’s Anabaptist communities for his iconic etchings in the Martyrs Mirror by Thieleman J. van Braght (1685), Jan Luyken produced over three thousand other works that included paintings (of which only a few survive), drawings, prints, and poems. Luyken published twelve books focused on piety and Scripture, for which he both created prints and wrote poetry. He also produced illustrations for nearly five hundred books by other authors in disciplines as varied as biology, chemistry, geography, shipbuilding, early Christian history, and Dutch history, among others. The books and prints in this exhibition offer a closer look into the breadth of Luyken’s work.

Many of Luyken’s prints fall into the category of emblem literature. Throughout sixteenth- and seventeenth-century Europe, but particularly in the Low Countries, artists and writers favored the use of emblems, which combined images and verses for didactic ends. Emblems generally included a title or motto, an illustration, and an explanation in prose or poetic form. Taken together, these three pieces sought to impart a moral lesson to the viewer or reader. Luyken’s emblems offered meditations on living a godly life and on attaining the path to salvation, using a wide variety of symbolism that would have been easily understandable to his contemporaries. 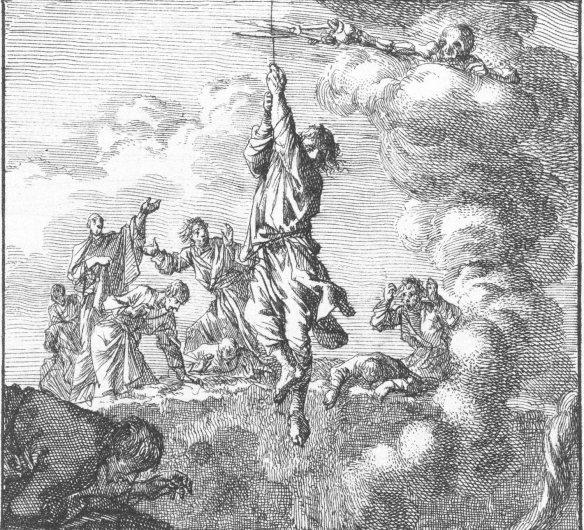 Dutch artists of the sixteenth and seventeenth centuries commonly depicted immoral or dangerous behavior, partly as an instructional device to their viewers. In this book of religious emblems, Luyken pictured “the unworthy world” as a warning to urge his readers onto the right path of Christian life. In the scene displayed here, a mortal hangs by a thread above the fires of hell while the specter of death waits to snip his life thread with scissors. If only the man will change his ways, he might be saved. The accompanying verse, Matthew 10:28, reminds us that a better fate awaits us beyond this life if we so choose it: “Do not fear those who kill the body but cannot kill the soul; rather fear him who can destroy both soul and body in hell.”

A catalogue raisonné lists all of the works created by a particular artist. This compendium of the works of Jan and Caspar Luyken includes not only the finished prints but also the sketches and preparatory drawings made in advance of the completed works. Looking at this drawing in comparison to the eventual print (see page 15) shows how Luyken worked out the basic composition in the drawing but added a much higher level of detail and linework to the finished product. Notice also how the compositions are reversed since Luyken would have drawn this image onto the copper plate, only to have it printed as a mirror image.

Tafereelen der Eerst Christenen (Scenes of the First Christians). With prints by Jan Luyken and verses by Pieter Langendijk and Claas Bruin, 1722; reprinted 1740, “Bedieninge des Doops in een rivier” (Ministry of Baptism in the River) 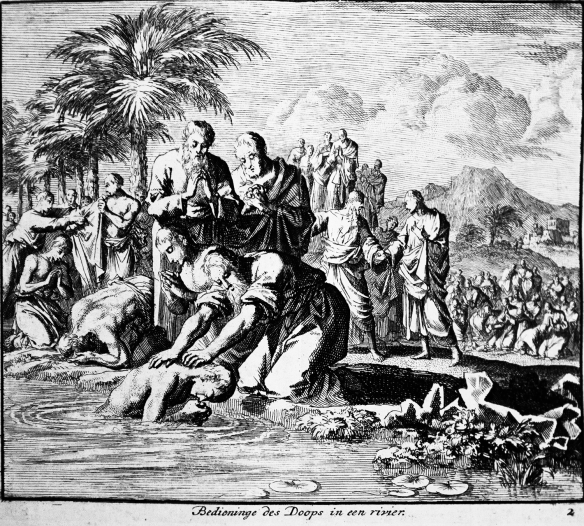 Ministry of Baptism in the River, from Scenes of the First Christians (Menno Simons Historical Library photo)

Even posthumously, Jan Luyken’s work continued to garner much attention. Ten years after Luyken’s death, ninety-two of his engravings were published in this volume of early church history. Poems by Pieter Langendijk and six-line verses by Claas Bruin accompany each of Luyken’s images. Not surprisingly, given Luyken’s Anabaptist connections, one of the scenes he chose to include in his series of early Christians is a scene of adult baptism. Notice how Luyken’s compositional lines lead our eyes to the baptism in the center of the image, with small background figures building up to larger foreground figures and with circular ripples of water surrounding the key players. 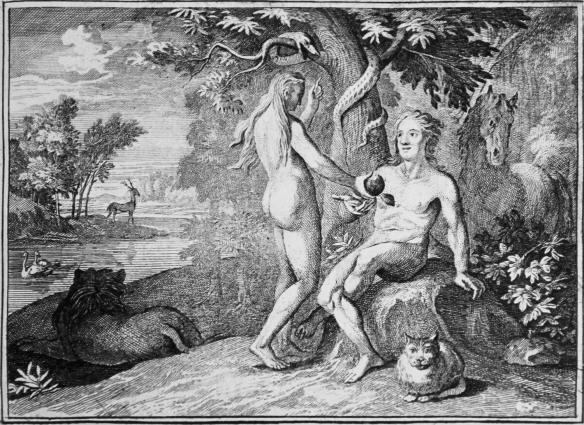 In picturing the fall of humanity from the Garden of Eden, Luyken placed the blame squarely on the figure of Eve through both image and text. In the print, Eve occupies the center of the composition and points to the tree of knowledge while she hands the apple to Adam. The rhyming verse that accompanies the image, which Luyken titled “Man Seduced,” laments the bitter outcome of Eve’s temptation.

Image for Luke 2:6-7, from The Scriptural Stories and Parables of the New Testament (Menno Simons Historical Library photo)

In this visual retelling of the New Testament, Luyken highlighted both somewhat obscure and well-known stories. The scene depicted here illustrates the two most familiar verses of the nativity story in Luke’s gospel:

6 So it was, that while they were there, the days were completed for her to be delivered. 7 And she brought forth her firstborn Son, and wrapped Him in swaddling cloths, and laid Him in a manger, because there was no room for them in the inn.

Notice how Luyken positioned the Christ Child at the center of the composition, surrounded by the parents, the shepherds, and the animals of the stable. Luyken’s rhyming poem on the theme of Christ’s birth accompanies the print.

Cruel Murder by the Spanish at Naarde, from Netherlandish Yearbook and History (Rijksmuseum photo)

In historical prints such as this, Luyken displayed a rare patriotic sentiment. The scene depicted here marks an episode in what came to be known as the Spanish Fury, a series of bloody confrontations in the sixteenth century when Spanish troops sacked and pillaged Dutch towns in an effort to maintain Catholic rule and allegiance to the Spanish Crown. Luyken pictured the chaos of the battle, and the closed-in setting suggests that the citizens of Naarden had no way to escape the villainous Spanish soldiers.

Dr. Rachel Epp Buller is a feminist art historian, print maker, book artist, and mother of three whose art and scholarship often speak to these intersections. She speaks and publishes widely on the maternal body in contemporary art, including her book Reconciling Art and Mothering (Ashgate/Routledge). She privileges collaboration in her work, which has resulted in various outcomes, including the edited collection Mothering Mennonite, with Kerry Fast (Demeter Press); an exhibition and book, Alice Lex-Nerlinger, Fotomonteurin und Malerin / Photomontage Artist and Painter, with Das Verborgene Museum in Berlin; and the exhibition “Beyond the Martyrs Mirror: The Prints of Jan Luyken,” with Bethel College student Alexandra Shoup, exhibit designer  David Kreider and archivist John Thiesen at the Mennonite Library and Archives. She is a Fulbright scholar, a board member of the National Women’s Caucus for Art, a regional coordinator for the international Feminist Art Project, and current associate professor of visual arts and design at Bethel College, North Newton, Kansas.

1 thought on “Beyond the Martyrs Mirror: The Prints of Jan Luyken”