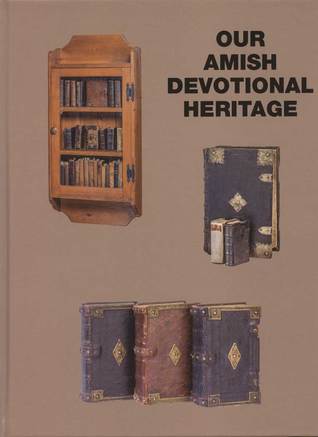 Our Amish Devotional Heritage is a consideration of religious and devotional literature used by the Amish, though not strictly comprehensive. It aims to be a less-academic counterpart to Robert Friedmann’s Mennonite Piety through the Centuries.1 Like other works from the Heritage Library, it also functions as an annotated and illustrated catalog of the library’s holdings.

The work is structured in five sections: Bibles and Bible Portions, Hymnals and Songbooks, Prayerbooks, Martyr Books, and Miscellaneous, each richly illustrated.

The Bible section begins with the Vulgate and Gutenberg versions, then moves to German-language editions, giving extensive treatment of the fourteen editions of the Froschauer Bible. The detailed listing of books kept by the Heritage Library are a mix of material construction and provenance, with notable descriptors as relevant—this remains the case throughout the rest of the book. There are a few details of interest to genealogists, such as the note that family registers started appearing within Bibles in the 1800s.

The second section, on hymnals, starts with Etliche Schone Christliche Geseng, then quickly moves onto the Ausbund and variations thereof. It then moves through Schrift and Lieder Registers (schedules of Scriptures and songs to be used in worship services), Unpartheysisches Gesangbuch, and Liedersammlung “B” and “G”, and the host of small songbooks used outside worship.

Especially interesting is Luthy’s consideration of the Ausbund hymns in that he includes in his survey Ausbund hymns that appear in non-Amish hymnals. This meshes nicely with a section on Lutheran-derived hymns that are used by the Amish. “Both Mennonites and Amish accepted Lutheran hymns, but only those which include no particular Lutheran doctrine.” To help contextualize these hymns, he includes short biographies of the Lutheran writers whose hymns appear in Amish hymnals.

The discussion on prayer books starts with Die Ernsthafte Christenpflicht and editions, including discussion on authorship of the prayers contained within. It also covers Golden Apples in Silver Bowls, Lustgärtlein, and Rules of a Godly Life.

Section four, on martyr books, is the smallest section, with some discussion of the early Dutch work Het Offer des Heeren, but mostly serving as an appendix to the 2013 publication A History of the Printings of the Martyrs Mirror. It is followed by the miscellaneous section covering daily devotionals, inspirational posters, devotional booklets and tracts, religious fiction, and several Sammelbands (collections of shorter works bound as a single volume).

Our Amish Devotional Heritage is generally a very helpful reference book and introductory text, especially given the full-color illustration and the low price. It is hampered by a poor font selection, which makes extended reading difficult. English-language speakers should also note that some of the textual comparisons are done in German only, with no English translation. Those faults, however, do not detract from the worthy accomplishment of organizing such a vast swath of literature in such an accessible way.