The last year has been full of discussion about collective memory and ownership of historical truth. Last summer I had to explain what “public history” meant to many people as I prepared to start a master’s program in the discipline. These days I’m just as likely to hear, “We need that now.”

Societal and political debates about history have coalesced in the last few months around the concept of commemoration through monuments. Statues of Confederate generals have been torn down or shrouded, and a statue of Christopher Columbus in Baltimore was just defaced. Here in Philadelphia, a months-long “Monument Lab” has kicked off with—among other pieces—a statue of an Afro pick incorporating a fist in the same plaza as a controversial monument to former mayor Frank Rizzo.

I’ve watched the unfolding conversation with interest but with critical distance. Others are saying things far smarter and more meaningful than I could. The National Council on Public History made a valuable contribution, for instance, with a special virtual edition of The Public Historian, re-running essays on monumentalism and memory around the world and across time. To date, one of the best proposals I’ve heard for Confederate monuments is that they all be piled up in one place to convey the volume of metal and concrete and stone that supported white supremacy.

I’ve begun to try to think about which monuments I support. Many monuments lack nuance and do not invite conversation. A bronze man on a horse doesn’t ask any questions, but makes powerful statements about power. As a historian, these are problematic characteristics, even if it weren’t true that monuments in the United States are overwhelmingly dedicated to white men over all other types of people. When President Trump asked on Twitter if monuments to Washington and Jefferson were next on the agenda for debate, someone on my social media feed acknowledged that the president accidentally posed the most relevant public history question of the year.

Looking closer to (metaphorical) home, what have Anabaptists, my people, commemorated? I struggled, initially, to think of any. Then I remembered the many sculptures that decorated the campus of Goshen College, my alma mater. I remembered Esther and Michael Augsburger’s “Guns into Plowshares” in Washington, DC (which is moving again). A Google search alerted me to a variety of Mennonite monuments scattered throughout Canada and Europe. I came across Paul Epp’s monuments across Eastern Europe to Anabaptist persecution, including a particularly haunting piece in Zaporizhia, Ukraine, that depicts a family over a mantle, the human forms in negative space in the granite, the voids representing disappeared Mennonites throughout the former USSR.

In this field, too, I find others far ahead of me. James Urry explored the history of Mennonite monumentalism a decade ago in the Conrad Grebel Review.1 Urry traces the resistance of Anabaptist communities to statuary, a form they associated with nationalism, up until the nineteenth century. Early in that century, Menno Simons began to be included (along with Calvin and Luther) in several monuments to the Protestant Reformation, and around 1861, a marker was proposed (and rejected) to mark the three hundredth anniversary of Simons’ death.

Nearly two decades later, an obelisk was raised to Simons in Friesland, purportedly on the site of his first teaching after leaving the Catholic church. Similar obelisks were erected in Russian Mennonite colonies over the next generation before such commemorative forms seemingly lost wide approval. “Instead,” writes Urry, “the opening of new schools, hospitals, and other institutional structures seemed sufficient to mark the steady march of progress in the Mennonite world.”

The next phase of Mennonite monumentalism, Urry argues, took place in the United States and Canada as Mennonite settlers joined other North American settlers in commemorating westward expansion. Canadian Mennonites of Russian origin marked the centennial of the 1870s wave of immigration, just as in the United States polities big and small geared up for the bicentennial celebration. Interestingly, Urry notes that many of the most fervent supporters of the 1970s Canadian commemorations were immigrants from the 1920s.

Another generation passed before the next form of Mennonite monuments were erected. These include Paul Epp’s monuments, and were spurred by tours and conferences in the Ukraine that revealed the extent to which evidence of Mennonite colonies had largely been erased. The statues generally commemorated specific events such as massacres or persecution, but Urry seems to argue that the erasure of colony-built environments was also a motivating factor. He focuses his analysis on one particular monument—which resembles a gravestone and marks the site of a 1919 massacre at Eichenfeld-Dubowka, north of Khortitsa, Ukraine—and makes a compelling argument about monumentation in this vein:

[This monument] clearly indicates some of the problems in trying to mark a complex past event in a singular stone memorial. At one level its message might appear simple: it is a memorial to the victims of a savage massacre who have lain in mass, unmarked graves until the stone was erected and unveiled. But the memorial is also supposed to mark not just a single event and its victims…

The fact that a number of people were murdered in such a terrible manner, on the date stated on the stone and detailed in the book, is not in question. But why the deaths occurred in this particular village, to this group of people, and at this particular time is something that must be interpreted and explained. The explanation in press releases provided at the memorial’s unveiling, and the more detailed account given in the later booklet, are simple and inadequate. We are presented with simple dichotomies of good and evil, with innocent Mennonite victims and guilty perpetrators. Such stark oppositions have little explanatory power in understanding such complex events.

Urry completes his analysis with the recent trend of memorial trees, grown from the seeds of ancestors still planted in European soil. These living monuments seem more in line with early Anabaptist iconoclasm (and indeed, Urry argues, earlier pagan forms of commemoration) but I feel the monuments still lack context and nuance.

Rather I would suggest that Mennonite monumentalism has recently, like global monumentalism, embraced more polyvalent forms that offer space for debate and nuance. The Eichenfeld-Dubowka tablet that Urry analyzed was dedicated in 2001. Eight years later—and two years after Urry’s essay—another Paul Epp monument, the family in negative space described above, was unveiled. By embracing an evocative visual language rather than an engraved message, this latter monument represents the new monumentalism, perhaps best represented by the Vietnam Veterans Memorial, designed by Maya Lin. These memorials reject the (literal and metaphorical) monolith form of many nineteenth- and twentieth-century monuments in favor of aesthetics more representative of current movements in public art and landscape architecture. Another example that comes to mind within the Anabaptist context is this monument at the center of a roundabout in Paraguay. 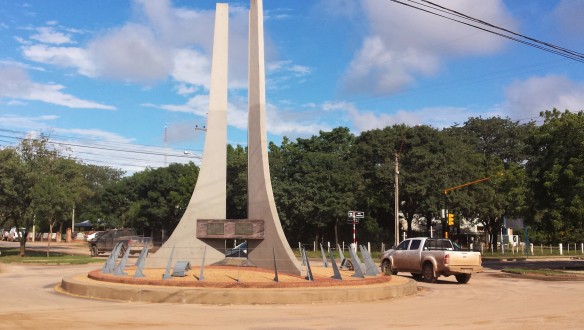 The result of this aesthetic shift is an openness to interpretation. Monuments are still not neutral, yet these commemorations allow space for people to bring a variety of experiences to them and come away with a sense of reflection (in the case of the Vietnam wall, this reflection is literal).

The line between public art and public monument can be sticky. A memorable presentation by Frank G. Pérez at the National Council of Public History 2017 conference described how attempts to diversify the monumental landscape in El Paso with public artwork faced countless obstacles. Monuments to conquistadors were unquestioned, but new sculptures elicited complaints about aesthetics and logistics. I suspect one of the factors that separates “monument” from “public art installation” in most people’s minds is choice of material (e.g. stone, unpainted metal). I look forward to Philadelphia’s Monument Lab’s exploration of that liminal space.

Meanwhile, the monolith has not gone away. Each year is a new opportunity to mark an anniversary of something or other. For Anabaptists in North America, many of those mark first settlements in an area. Many of these will take the form of a plaque or stone marker. I encourage families seeking to mark their persistence in the land to think carefully and critically about the statements that these monuments make. What was this land before your ancestors came here? Whose land was it?

On the global scale, Mennonite World Conference is gearing up for the five-hundredth anniversary of the first rebaptisms in Zurich. In Mennonite Life, Ben Goossen has argued, persuasively, that Anabaptists should embrace a more polyvalent origin story that spans from apostolic times to the present and includes the global church. Like monuments, other kinds of commemoration can tend to reify established narratives rather than providing context or provoking dialogue.

I have learned in the last couple months that monuments can spark debate, but sometimes only after years of organized opposition. Historians are in a position to contextualize the origins of these obelisks and busts, to tell the stories of how and why they came to be there. I think, however, that some monuments are effective because they invite questions and emotions as well as marking an event or movement. Let’s have more questions, more reflection, and fewer white men on horses.