The most recent edition of the Harmonia Sacra (2008) next to some songbooks by the Ruebush-Kieffer company displayed on Aldine Kieffer’s organ. Menno Simons Historical Library

Though I’ve lived in Harrisonburg and worked with the EMU Special Collections for nearly eight years now, it took a British Christmas advertisement for me to fully appreciate the musical heritage of the Mennonites in the Shenandoah Valley. Sainsbury’s is a supermarket chain in the UK and, like many other retailers in the UK, creates specific holiday-themed advertisements to entice Christmas shoppers to their stores. Two years ago I saw their 2014 Christmas advertisement online  and was intrigued to hear a familiar tune.  For this ad they had partnered with the Royal British Legion to commemorate the 100th anniversary of the Christmas Truce of 1914. The beautifully shot commercial features British and German soldiers in the trenches singing “Silent Night/Stille Nacht” and then as they join together in no man’s land the viewer hears the strains of “Leaning on the Everlasting Arms” (starting at 2:09). When I Googled the hymn to figure out why it was so familiar, I discovered that it was written by an Anthony Showalter from Rockingham County, Virginia. Thus my curiosity about Mennonite hymnody in the Valley was piqued.

I knew that Mennonites have long been regarded for their unique tradition of acapella singing and talent for four-part harmony. But I didn’t realize how much influence a man who lived in a town ten miles northwest of where I live and work had in shaping the tradition.

The story begins with Joseph Funk. Funk was the son of Mennonite Bishop Henry Funk and moved to Rockingham County, Virginia from Pennsylvania with his family as a young boy. A bit of a jack-of-all-trades, he worked as a farmer, teacher, herbalist, and translator before settling in Mountain Valley (now Singers Glen), Virginia1 and beginning his work as a printer. He found success in the music business, doing a great deal of translation, compilation, and printing. He also ran singing schools, teaching individuals of all ages how to read music and sing. One of his greatest contributions is his development of shape-note music2; a musical notation that employs different shaped notes to denote pitch. He used this method in his singing schools and it quickly gained popularity as it was easy to learn and effective. Funk believed that all church members should be able to “take part in the ‘divine art’ of singing sacred songs” and went so far as to actively discourage the use of choirs in Mennonite and other denominations in order to encourage congregational singing3. Through his singing schools and shape notes he also introduced Virginia Mennonites to three- and four-part harmony and to singing in English, two practices that later spread throughout most Mennonite communities in North America.4

Funk printed numerous song-books, but his most famous work is the Harmonia Sacra, a collection of ‘genuine church music’ that is a beloved songbook still used in Harmonia Sacra ‘sings’ throughout the Valley.

Funk’s grandson, Aldine Kieffer, continued his musical tradition with his partnership with Ephraim Ruebush. They began their collaboration teaching singing schools together before the outbreak of the Civil War, then after the conflict finished (both served, neither having been raised Mennonite), they began the Ruebush-Kieffer publishing company. They started printing in Singers Glen then moved the operation to Dayton, Virginia, in 18785. Through their singing schools and their song books they taught many people in the Shenandoah Valley and beyond to sing the shape-notes and tunes devised by Funk. 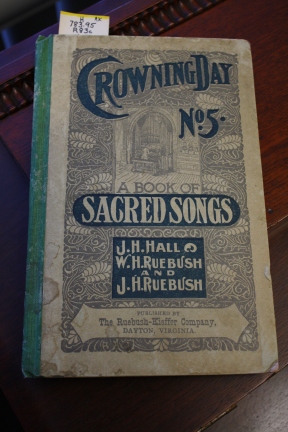 One person so influenced by this legacy was Anthony Johnson (A. J.) Showalter from Rockingham County, Virginia. His father was a singing school teacher from the Funk tradition, so Showalter grew up attending singing schools and studying music. He began his career working for Ruebush-Kieffer as a singing school teacher and in the publishing house. Showalter later moved to Georgia and became a prolific composer; his most recognizable tune is “Leaning on the Everlasting Arms,” which he wrote in 1887 after hearing about two friends losing their wives6.

Though many can recognize the tune, few may know its connection to the Shenandoah Valley or its ties to Mennonite hymnody. Once I learned the hymn’s provenance I felt that it was an odd, yet perhaps apt, juxtaposition to have a hymn born out of a Mennonite tradition of song used in a commercial about war that highlights one of the few peaceful moments of the horrific conflict. I’m sure when the advertising executives chose the song, they had little idea of its connections to an historic peace church tradition in rural Virginia, but to me that makes it even more meaningful.

*If you are interested in learning more about Joseph Funk and the Ruebush-Kieffer legacy, the Menno Simons Historical Library is a great place to start! We have a nearly comprehensive collection of Ruebush-Kieffer and Funk song books, as well as interesting artifacts like Joseph Funk’s writing chair and Aldine Kieffer’s organ (which is still played occasionally by Lois Bowman, former librarian and wonderful volunteer).