Last spring, I represented Mennonite Church USA at my first Global Anabaptist Mennonite Encyclopedia Online board meeting. GAMEO is “the most trusted online source for information on Anabaptist groups around the world” with articles on “Anabaptist-related congregations, denominations, conferences, institutions and significant individuals, as well as historical and theological topics.”1 Those familiar with GAMEO know that much of its content originated over fifty years ago with the publication of the four-volume Mennonite Encyclopedia (ME). Many updates were included in a fifth edition of ME, published in 1990, and over 4,000 more articles have been added since GAMEO went online in 1996.2 But there are still a host of articles that were published in the 1950s and have not been updated since. For example, the entry for Orrville Mennonite Church, my home congregation, was authored by Harold S. Bender in 1959.

During the board meetings, we spent much time discussing how to encourage more people to get involved with GAMEO.3 As a public history project, GAMEO holds enormous potential to harness the collective knowledge of the global Anabaptist community. Janneken Smucker pointed this out in a recent blog post on crowdsourcing Anabaptist history. As she notes, one of the biggest challenges for a public history project lies in “cultivating an enthusiastic community of participants.” But is that all it takes? In a search for answers to this question, I started to think about what went on behind the scenes during the fourteen years it took to produce the original ME, one of the most well-known, inter-Mennonite public history projects.4 What accounted for its success and what, if anything, can the project teach us about doing public history in 2018?5 I spent time looking at some of the project files of the ME at the MC USA Archives (Elkhart) and here’s what I came up with.6

First, a public history project requires extensive planning and the dedication of a core group of leaders. As Smucker noted in her blog, enthusiastic communities of participants do not cultivate themselves. Before the project began, the ME editorial board enlisted the support of an international group of editorial consultants. The board also developed criteria for article topics and assembled a list of potential contributors. Managing editor Melvin Gingerich then mailed thousands of letters to prospective authors to invite their participation and supply writing instructions. The finished product included over 13,000 articles contributed by more than 2,700 writers. Like its predecessor, GAMEO has also benefitted from strong leadership. Sam Steiner, Marlene Epp, Richard Thiessen, Bert Friesen, Susan Huebert, and many others have given years to the project, commissioning or writing new articles, updating old ones, and editing submissions. While both projects have enjoyed broad participation, neither would have been possible without heavy involvement from a core of dedicated individuals. For example, over half of the content of the original ME was generated by just eight people.7 My guess is that a similar scenario is true for GAMEO.

Second, a successful public history project requires institutional support. While the ME was under production, the three top-ranking editors—Bender, Krahn, and Gingerich—enjoyed the full support of their employers. In fact, Goshen College and Biblical Seminary, Bethel College, and the Mennonite Research Foundation allowed each to devote up to one quarter of their time to the project. Lead editors for the GAMEO project have never had their duties written into their job descriptions, but several institutions have given critical support. For example, Conrad Grebel University College provided computer equipment and web hosting early on and the Centre for Mennonite Brethren Studies in Winnipeg supported the digitization of volumes one through four of the ME.8 Most recently, the Institute for the Study of Global Anabaptism provided an institutional home for GAMEO under the direction of general editor John D. Roth. 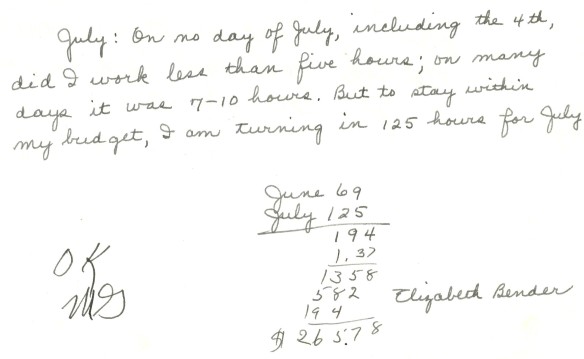 Finally, a successful public history project requires sustained financial support. The ME was underwritten from the beginning by three denominational publishers, which covered the cost of labor, travel, and office expenses. Aside from wages paid to the three lead editors, Elizabeth Horsch Bender earned wages as a translator and assistant editor (often on under-reported hours) as did dozens of secretaries and typists.9 Over fourteen years, the three publishers paid just under $40,000 in editorial expenses.10 Adjusted for inflation, this amount is equivalent to roughly $370,000 in 2018.11 The publishers also bore the cost of printing and binding all four volumes. That figure came to $91,000.12 In the final year of the project, A.J. Metzler anticipated that returns on sales would cover the printing and binding costs but none of the editorial costs and only part of the selling costs. In other words, the Mennonite Publishing House lost a significant amount of the money it invested in the project. He concluded, “While the justification of this investment would be fully defended by our historians and scholars, it may be questioned by others.”13 GAMEO operates on a yearly budget of about $4,000. Like the ME, it relies upon financial support from Anabaptist-related institutional sponsors in the United States and Canada. As with the ME’s 2700 writers, GAMEO authors do not receive compensation. Unlike the ME, however, GAMEO cannot pay its editors and relies upon smaller-scale contributions from a wider variety of sponsors.

So what can a comparison of the ME and GAMEO teach us about doing public history in the digital age? Of course not all public history projects are cut from the same cloth. The ME was a massive project. Many other public history projects, including GAMEO, function successfully on a much smaller scale. Moreover, most public history projects in 2018 do not result in the publication of a four-volume book series, so printing and binding costs are not part of the equation. Since GAMEO lives online, the annual budget mostly covers the cost of webhosting and IT support and email makes communication among editors and with authors much more rapid and less costly than it was for ME staff.

In light of these difference, one might question the usefulness of comparing the ME with GAMEO and other current efforts to do public history. However, since much of the content of the ME was generated by 2,700 contributors, I think it is possible to draw some useful conclusions, especially in light of current efforts to crowdsource digital history projects. For me, the comparison highlights the enormous amount of work that goes on behind the scenes. The ME would not exist without the labor and expertise Elizabeth Bender gave to translations or the thousands of hours given by secretarial staff. Similarly, digital history projects like the University of Iowa’s DIY History require huge amounts of work behind the scenes. Before crowdsourcing could begin, the university invested time, labor, and resources to scan documents, store them, and develop specialized transcription software. It’s no coincidence that such an expansive project is hosted by a major public research university.

Much has been made of the “tremendous amount of work” that Bender, Krahn, and Gingerich invested in the creation of the ME.14 This is certainly true, but it didn’t hurt that they were being paid for their labor. As Conrad Stoesz pointed out in response to Smucker’s blog post, in the Anabaptist world we live in a time of “soft support for our…archival institutions” and, I would add, historical endeavors in general. This makes the volunteer efforts of GAMEO’s lead editors all the more impressive. They have given years of dedicated service to the project and created a valuable resource for anyone with access to the internet.

If you find GAMEO useful, I encourage you to give some money to support the project.15 Better yet, help us update old articles (beginning with many of the copious links included in this post) and generate new content. Please contact me or one of the other editors if you want to get involved. I would also welcome archivists, librarians, historians, and anyone else to weigh in on my conclusions and continue a conversation on the best ways to do Anabaptist public history in the digital age. Let’s get to work!