Mainstream (that is, acculturated) North American Anabaptist denominations have made efforts to reach outside of ethnic and geographical boundaries in many ways over the last century and a half. Beginning with the resettlement of Mennonite Refugees in the 1870s and continuing with mission and service efforts at home and abroad, these efforts have had varying amounts of success (however success is quantified). If this is a continuing social and evangelical goal for these denominations and the populations that compose them, the discipline of public history can provide strategies and techniques to achieve it.

Public history is a field that doesn’t like to be pinned down. Academic programs branding themselves as “Public History” sprang up in the 1970s in response to a shortage of jobs in academia, but the work the newly minted public historians did had a long history. Many of the products of the discipline—exhibits, archives, lectures, oral history, monuments and markers—were the only history products that existed prior to the nineteenth century and the Rankean professionalization of academic history. In the early twentieth century, public history had flourished in the form of the Works Progress Administration and the National Parks Service.

In the last half century, the field of public history has tried to define itself, often settling for the distinction that it is concerned with history outside of the academy. Yet at the same time public history has proliferated within the academy, with new public history programs emerging every year. Part of this explosion of interest is pragmatic: with fewer tenure-track jobs in the humanities available than the number of graduate students, departments must prepare their pupils for life outside of the academy. In part, however, public history is the logical extension of the social history movement of the 1960s. Public history often seeks to decentralize history through such tenets as shared authority. In the prologue to Museums, Monuments, and National Parks: Toward a New Genealogy of Public History, Denise Meringolo argues that public history is “practicing history not simply in public but rather for the public” (italics in original). By engaging in collaborative work with inter-disciplinary methods, Meringolo suggests, public historians who self-identify as such primarily see their work as public service.

So what would specifically Anabaptist public history look like? Or to put the emphasis differently, what would public Anabaptist history look like? Or what does it look like? Within the field of Anabaptist History, we already have many institutions that could be called public history: archives and libraries, local and regional historical societies, and interpretive exhibits in museum settings, to name a few. In several cases, multiple elements are present together, as in the Mennonite Heritage Center in Harleysville, PA, and Lancaster Mennonite Historical Society, which combine exhibit space with library and archives. Efforts such as Lancaster Roots, a calendar of cultural events by the Lancaster Mennonite Historical Society and 1719 Hans Herr House & Museum, take history out to churches and invite people in with specific programming on cultural crafts, as well as lectures.

However, these institutional settings tend to be intrinsically conservative in nature. Jarrett M. Drake has written about the oppressive experience of archives, which protect the resources within them through the tyranny of “silence, solitude, and surveillance.”1 Furthermore, archives often exclude people by virtue of their accessibility—located far from public transport or open for limited hours—or simply by the hoops would-be researchers must jump through—registration, fees for copying through convoluted mechanisms, etc.

On this blog in recent months we’ve seen calls to “deterritorialize” Anabaptist History from Felipe Hinojosa and Jason B. Kauffman. What could that look like?

The Lancaster Longhouse at the 1719 Has Herr House & Museum (created in collaboration with Lancaster Mennonite Historical Society, the Circle Legacy Center, and local American Indian groups) is one example of public history in an Anabaptist context, though its creators may not have envisioned it as such. The digital archive of a (relatively) diverse Anabaptist web presence by Mennonite Church USA’s archive (begun under Colleen McFarland Rademaker’s tenure as archivist) is another way forward. 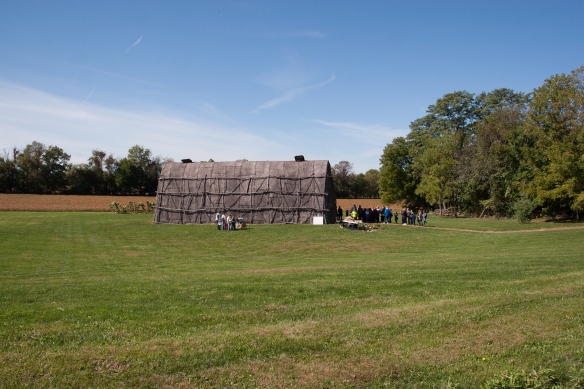 This is the work of history but it has bearing on the present and future reality. The Longhouse and the MC USA web archive are both attempts to share authority with communities that have been held at arm’s length, at the the periphery, by Anabaptist denominations and academia. If Anabaptist denominations want to move toward a more diverse population (racially and otherwise) within North America, the techniques of public history present one way toward reconciliation and engagement with populations that have been excluded, offended, or oppressed by the church and/or the academy. This could also be an opportunity to connect with Amish and Plain communities who have been left out of the academic history of the last fifty years other than as subjects of academic work (and the Lancaster Roots approach is especially suited for this outreach). At the root of all of those efforts must be a willingness to cede truth-telling power, truly collaborate, and have projects and the greater church move in directions that weren’t expected or hoped for.

More traditional public history institutions can make changes to deterritorialize their collections. Archivists can identify collections that have been overlooked—those that provide a window into the lives of the evangelized as well as the missionaries, the lives of women as well as men, and the lives of Anabaptists whose sexuality was not recognized as legitimate by their social and religious communities, among others—and invite scholars to tell the stories they contain. Traditional methods such as historic preservation can be used in areas outside of the traditional Anabaptist enclaves—some of the first 1-W or MVS units could make fascinating historic house museums. Some changes could be painful. The Heinrich (Henry) Voth collection in the MC USA archives could be repatriated to the Hopi Reservation, for instance, even though the Native American Graves Protection and Repatriation Act (NAGPRA) doesn’t extend to photographic materials.

The work of public history is not apolitical. As an example of the aims and methods of public historians in this country, it is instructive to read the National Council on Public History’s editorial in the wake of the presidential election.2 The whole piece is worth a read, but here’s the crux of the argument:

“Promoting education and dialogue will likely not be enough to ensure that human rights are respected. Public history exhibits and projects provide people with tools to parse how fear and self-interest can be manipulated, but if we want to walk our talk, our institutions will need to continue to strengthen emerging practices of direct engagement and civic action that we see around the field.”

While standing up for immigrant, minority, and refugee rights fits comfortably within Biblical calls to action, historians working in MC USA-affiliated organizations may find that advocacy for other vulnerable groups, such as LGBTQ Americans (which is also within the scope of “the least of these”) puts them in political or ethical quandaries at work. Historians may find themselves, in the coming years, in the public arena against their will, as our own Tobin Miller Shearer did this week when he was listed by an alt-right group for “advanc[ing]leftist propaganda in the classroom.”

This work is not simple. As Philipp Gollner cautions,  it will be easy for white progressive voices to drown out others, even while seemingly asking for input.3 The Mennonite world that I grew up in was proud of its humility, multiculturalism (even while being predominately white), and progressivism. Yet that very progressive identity can shield against self-reflection. Humility, self-examination, and willingness to listen when others tell you that you are wrong are all necessary in this work.

More pragmatic concerns are where the financial and social capital would come from to develop more innovative public history programming. The Anabaptist historical institutions that exist have long histories, yet little surplus that they could gamble on an ephemeral program that may or may not have the desired effect. Our colleges face tough financial times, and the departures of Lancaster Conference and others from MC USA  have put fund-raising throughout the Mennonite non-profit world in jeopardy in ways that may have knock-on effects.

So what does public Anabaptist history look like in a North American context and what should or could it look like? Our institutions have been resourceful with the budgets they’ve been given, but also tended to take conservative forms. I want to see Anabaptist Historians (the folks who contribute to this blog as well as the broader field) try new ways of making history that get out of our fellowship halls and our college campuses and our archives and combine the concerns of our religious community—pacifism, social justice, and the Dominion of God—with the methods and verve of public history. As public history moves toward disruptive techniques that cede control and challenge traditional narratives, public Anabaptist historians should do the same. As the greater discipline hears a call to activism, public Anabaptist historians should embrace the same call, especially where it aligns with the ethics we espouse in our congregations and households. We should approach the challenges that come—including funding shortfalls and awkwardness—with humility as well as fervency.

3 thoughts on “What do Public History’s methods have to offer Anabaptist History (and the Anabaptist Future)?”