My Mennonite identity was born of the convergence of post-World War II urban missions and African American migration to the city of Cleveland. The Lee Heights Community Church in Cleveland was one of the original 13 Black Mennonite congregations, and is perhaps one of the very few Mennonite churches in the U.S. that has had a racial consciousness to it since its very beginning. Established in 1958, this congregation emerged against a complicated background of race and politics. 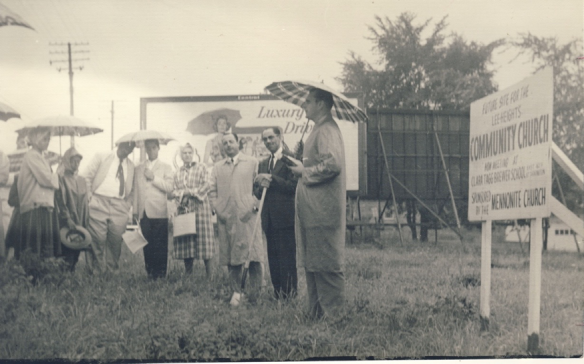 Before World War I, about 10,000 Black people lived in Cleveland. By 1960, that number had swelled to a quarter million, with most Black families living on the east side of the city. The influx, especially between 1940 and 1960, greatly taxed the availability of housing and schools, and they were often inadequate and in poor condition. These conditions, replicated in cities across the country, erupted in the Hough riots in 1966. Tensions rose, as well as distrust of Cleveland’s old guard politicians, setting the stage for the election of the first Black mayor of a major U.S. City. Cleveland was attractive because jobs were available. Black men could find work, especially in the steel and auto industries. Other jobs possibilities were with the post office, and teaching and social work jobs were open for Black women, in addition to domestic positions.

As opportunities increased for Black people, so did white flight. Suburbanization and the completion of interstate highways facilitated the shift in housing patterns. As Blacks moved into previously all white neighborhoods, white families moved out. The neighborhood transitions were facilitated by the institutionalized racist policies of realtors, construction companies, banks, and mortgage and insurance companies. Riots along the east coast and throughout the Midwest accelerated the push of Black out of white neighborhoods and helped Black neighborhoods become firmly entrenched ghettos by World War II. 1

This was the climate when Mennonites began their urban missions projects in earnest.

The heightened racial unrest occurred at the same time white Mennonites were moving from isolated farming communities to major cities. As conscientious objectors to war, Mennonite men who otherwise would have been drafted into military service fulfilled their civic duties by entering into 1-W service, often in cities. Common assignments were located in hospitals and public service agencies. Denominational mission and relief agencies also helped coordinate voluntary service assignments in urban communities; through these avenues many young white Mennonites first encountered African Americans and had eyes opened to the reality of racism and Black discontent in America.

The Mennonite church in Cleveland church began as a Bible school, run by volunteers from the nearby rural Plainview (later Aurora) Mennonite Church in the 1940s. This ministry was located in the Gladstone area near East 55th Street, and housed in an elementary school. By 1948, over 400 children had attended the summer Bible school, and that year, the program was extended into the fall. A house was purchased and renovated in 1951 for the Voluntary Service (VS) unit, which housed men who were doing 1-W service in Cleveland. In 1952, Vern Miller, a recent Goshen College graduate, and his wife Helen moved into the area.2

Gladstone’s first church council was organized in the spring of 1953 when the church had 35 members, most of whom lived in the neighborhood. The congregation quickly outgrew the original building, and the VS unit was eventually phased out. In 1955, plans for an urban renewal project signaled the end of the Mennonite ministry at Gladstone.3

The Housing Act of 1949, part of president Harry Truman’s Fair Deal [Thank you Linda Rosenblum for that correction], expanded the role of the federal government in housing, and chief element of the plan provided federal funds for “slum clearance” with the promise to build new public housing developments. Entire neighborhoods were razed in order to make room for non-residential public works, and in some cases rebuilt housing that was too expensive for the current inhabitants. Poor people, usually people of color, were pushed out of their neighborhoods, inspiring the pithy saying “urban renewal equals Negro removal.” 4

With the mission board’s backing, the Millers decided to move southeast of the first church into the Lee Heights area where there was only one other church. The area had recently been annexed by the city; the land was not desired by industry because it was partially wooded and had ravines running through it. When the congregation formally organized in 1957, they were first known as the Protestant Inter-Racial Parish. These dynamics were the DNA for the new church – a ministry of the Mennonite Church, but interdenominational and community based. The doctrinal statement of the church included a statement of the church’s stance against racial segregation and discrimination.

In 1959, the General Conference Mennonite Church issued a statement called “The Christian and Race Relations” that confessed Mennonites were complicit in “discrimination against racial and minority groups (Mexicans, Negroes, Jews, American Indians, Oriental peoples, and others),” weakening mission outreach. Because “in Christ all barriers of race and nation have been destroyed,” the statement urged congregations to “welcome all persons as brothers and members despite their color” and called on all church institutions to examine their policies and programs. 5

The 1963 General Conference Confession of Faith called the church to be a witness against racial discrimination, economic injustice, and all forms of human slavery and moral degradation. 6

At a conference on race relations in 1964, Vincent Harding challenged Mennonites, arguing they had come late to the issue even though their very theology and history compelled their response. 7

Mennonites in America were no longer as socially isolated, and the fruits of mission efforts meant that people of different racial and cultural backgrounds were now part of the Mennonite family; this diversity necessitated an expansion of Mennonite’s peace position.

Guy Hershberger’s 1941 (revised 1953) War, Peace and Nonresistance articulated the Mennonite stance on non-resistance for the 20th century church. Written in part to explain Mennonites to outsiders, but mostly to help that generation of American Mennonites understand their theology, the book outlined the biblical basis for Mennonite non-resistance, and went beyond military involvement to address issues like responses to labor union tactics as part of a peace witness. Hershberger was clear that a faithful biblical response to violence was to not resist; one did not pick up the sword, and tactics like demonstrations, boycotts and strikes were to be avoided because these were coercive; that is, not nonresistance. 8

For this reason, Hershberger could not support Gandhian (and subsequently Civil Rights Movement) tactics of boycotting and demonstrating. Yet he did call Mennonites to a response to racial injustice and racial unrest.

Challenges also came directly from the African American community. In 1945, the Mennonite Biblical Seminary moved to Chicago. While working on a doctorate in history at the University of Chicago, Vincent Harding was called to co-pastor the integrated Woodlawn Mennonite Church, where his spouse, Rosemarie Harding, also served as a lay counselor. The Hardings pressed Mennonites to use their peace and justice theology as a response to systemic racism. This call is certainly relevant for Mennonites today.

5 thoughts on “Mennonites, Mission and Race: The Cleveland Experiment”