#Mennonite & #Anabaptist historian-friends: Can you point me to research on charismatic mvmt and North American Anabaptists?

My scholar friends suggested a few books — mostly theological/pastoral texts, rather than historical treatments. Fortunately, they weren’t the only ones to respond: my pastor friends (especially in Mennonite Church USA) offered lots of suggestions. They pointed me to groups such as the Hopewell Network, a group of formerly Mennonite churches born through charismatic outpourings that split off from Atlantic Coast Conference in 2001 after it developed a more “interdenominational vision” of ministry, as well as to specific Mennonite individuals and congregations influenced by the charismatic movement. They even offered to set up some oral history interviews for me! But they also couldn’t point to any historical treatments of the subject.

The whole interaction confirmed what I already suspected: Anabaptist-Mennonite historians have paid very little attention to charismatic expressions within the traditions they study. While much—though not enough—ink has been spilled trying to understand the roles played by Anabaptists in the post-World War II evangelical renewal movement, little to no scholarly effort has been directed toward Anabaptists’ role in charismatic renewal. But as my pastor-friends’ comments showed, the historiographical silence belies the reality that lots of Mennonites and Brethren in Christ have embraced and been influenced by charismatic beliefs and practices.

This silence is telling, because it reminds us of the problematic ways that Mennonite historians have typically framed the influence of renewal movements (especially post-World War II evangelical renewal) on Mennonites. Here’s how David R. Swartz has described the conventional historiography:

The usual narrative is one of declension, a story of evangelicalism’s insensitivity to the perils of militarism, of getting into bed with American culture, of more concern for theological particularities and not enough concern for ethics, of its easy denunciation of abortion and its defense of capital punishment. . . . Its logic assumes both a caricatured evangelicalism (pictured as fundamentalist vultures) and Mennonitism (pictured as pristine pacifists). 1

Historians will recognize that the declension mode frames other stories of Mennonite encounter, including the colonial-era encounter between North American Mennonite immigrants and radical Pietists.2 Yet as Swartz concludes, while there is truth in the declension narrative critique, this framework is too simplistic.3 Telling the story of Anabaptists in the charismatic movement offers historians an opportunity to move beyond the “simplistic” declension narratives and to explore alternative ways of talking about Mennonites and the broader Protestant world. 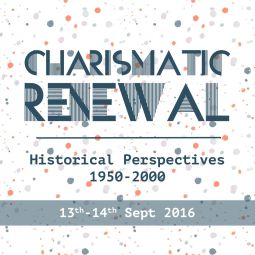 I’m still in the process of sorting out how and why Mennonites and Brethren in Christ took part in charismatic renewal, and what their involvement means for the story of North American Anabaptism in the twentieth century. I shared some of my initial thoughts at a conference in September — “Charismatic Renewal: Historical Perspectives, 1950-2000,” a two-day event at Wycliffe Hall at Oxford University in the UK. In the next couple of posts in this series, I’ll draw on the paper I presented at that conference to set out a few tentative ideas about Anabaptist-Mennonites and the meaning of their encounters with the Spirit in the last half of the twentieth century. Stay tuned!

3 thoughts on “Encounters with the Spirit: Anabaptists in the Charismatic Movement (Part 1)”