I didn’t grow up with peppernuts. My mom made simple Christmas cookies like peanut butter blossoms with Hershey kisses on top, or dipped peanut butter filled Ritz Bitz in chocolate. But when I married in to a so-called Russian Mennonite family—actually “Swiss Volhynian,” to be more precise—from Harvey County, Kansas, I learned about hardcore, generations-old culinary traditions, something my Old Mennonite family did not have.1 The women of this family, along with the men of some of the younger generations, are peppernut making machines, each year producing dozens of pounds of miniscule cookies, each about the size of a pencil eraser (when I try to make them, in contrast, they typically are the diameter of a dime). Like any humble family with its secret pride of tradition, these central Kansas Mennonites view the peppernuts of others as inferior creations. How could a bloated ginger cookie kissed with a gumdrop even be of the same genre as these refined anise oil rock-hard concoctions?

Yet, that’s one of the great things about traditions: they evolve and shift and adapt to new lifestyles. To another family, those gumdrop cookies are peppernuts, and the crunchy eraser-sized bits are strange and foreign.

In my American Civilization course, an interdisciplinary general education class I teach every semester, the final unit of the course centers on folklore. I introduce the subject by using the American Folklore Society’s official definition: things that groups of people traditionally believe, do, know, make, or say, which serve as part of their cultural identity.

I ask my students to give examples of these behaviors from their own worlds—from their families, ethnicities, clubs, teams, sororities, and communities. I provide my own.  My Pennsylvania German background dictates that we must eat pork and sauerkraut on New Year’s Day in order to have good luck in the new year—we must snort ahead (by eating pig) rather than scratch back (by eating chicken or turkey). I describe being a fifth generation Mennonite quiltmaker, emphasizing that the quilts I make are quite distinct than those of my foremothers, but part of an important cultural tradition that ties me to these previous generations. I recall how for years I have made pizza every Saturday evening, since my family did that throughout my childhood, in the early years using Swiss cheese from Eastern Ohio. My mom remembers how her mother made pizza in the 1950s on Saturday evenings, using a Chef Boyardee sauce. We aren’t Italian-Americans maintaining a tradition from the old world; instead we created a new tradition that has carried on several generations.

My students counter with tales of the Feast of the Seven Fishes on Christmas Eve, popularized by Italian-Americans but with southern Italian origin. A Venezuelan American student shared her family’s tradition of walking around outside carrying luggage shortly after midnight on New Year’s Day as a way to ensure travel in the new year, and burying money only to dig it up after the clock strikes midnight in order to bring economic prosperity. One student came from a family of taxidermists and described how she grew up learning how to stuff a carcass. Others describe distinct foods, prayers, superstitions, jokes, and songs that are deeply rooted to their sense of belonging within their tribes, however they define them.

I then emphasize that folklore is living, not some kind of static fossilized behavior that is unchanging over time. Last New Year’s Day my daughter and I gathered with friends to make jioazi, Chinese dumplings inspired by the ones I learned to make when in Sichuan Province during Study-Service Term at Goshen College in 1996. We filled them with pork and cabbage, along with ginger and garlic and sesame oil. I knew that by eating this combination of ingredients, even if wrapped in a flour wrapper and steamed and fried, I would still have fulfilled my requisite intake of lucky foods. And I think this might become a new tradition in my family. 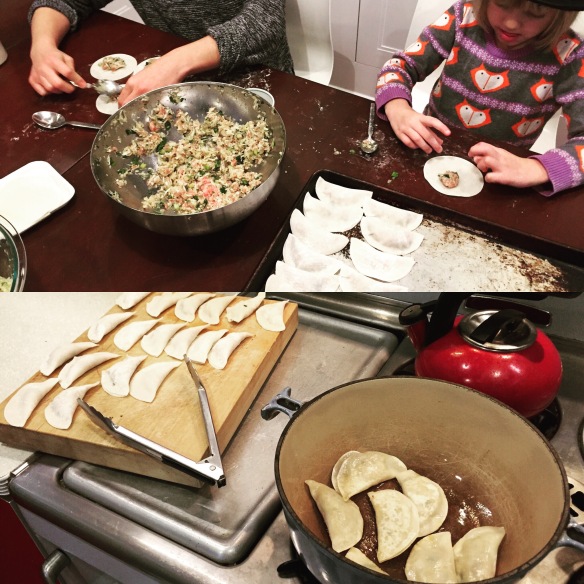 3 thoughts on “Peppernuts and other living traditions”