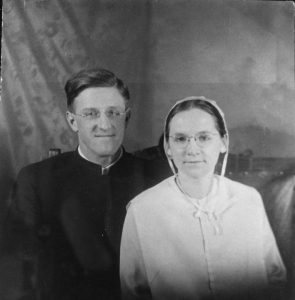 Fannie Swartzentruber has stuck with me for more than a dozen years. I first encountered this unassuming church matron from Gay Street Mennonite Mission in Harrisonburg, Virginia, back in March of 2005 while on a research trip to Eastern Mennonite University’s archives. As I read of her life and legacy, I was impressed with the deliberation, focus, and passion she brought to her ministry with the African-American community in Harrisonburg during the 1940s. Although her story, like all of ours, is complex—at times burdened by white paternalism and the patent racism of her era and at times leavened by a deep courage and fidelity of friendship across many decades—she nonetheless speaks to our present moment because of her witness of holy disruption.

Disruption in the church is, by its very nature, controversial. During the Mennonite Church USA gathering in Kansas City in 2015, Pink Menno activists disrupted the assembly meetings with a piece of satirical theater that left as many angered and frustrated as elated and energized. There have been other acts of holy disruption in the Mennonite world that have garnered attention. In February 2003, a group of activists connected to the Damascus Road anti-racism process disrupted a meeting of the Mennonite Central Committee Central States board to call for action to dismantle racism in the organization.1 In the 1980s, a homelessness advocate and Mennonite minister by the name of David Hayden disrupted meetings of the Virginia Conference to demand delegates’ attention to housing issues in their region.

Given Mennonites’—and especially white Mennonites of European descent—love of order, decorum, and respectability, it is perhaps no wonder that activists have chosen to disrupt convention meetings, delegate sessions, and occasionally even worship services. The payoff in attention to their cause, even if accompanied by frustration, anger, and, sometimes outright animosity, has been disproportionate to the risk. There was little chance that peace-loving Mennonites would physically assault interlopers. Even when emissaries of the 1969 reparations movement known as the Black Manifesto threatened to disrupt worship services, Lancaster Mennonite Conference leaders enjoined ministers to engage in “orderly discussion” rather than “calling . . . the police” or “attempting to restrain those who would enter our services.”2

No wonder then that Swartzentruber caused such a fuss. In 1940, the Virginia Mennonite Conference’s executive committee announced that they would be conforming to the “general attitude of society in the South toward the intermingling of the two races.”3 The executive committee segregated the rites of baptism, the holy kiss, foot washing, and communion, claiming that they did so in “the best interests of both colored and white.”4 Not coincidentally, they instituted the Jim Crow policy even as Mennonites in Virginia faced increased pressure for their non-conformity to the country’s military buildup during World War II.5

Swartzentruber and her husband Ernest challenged their supervisors, demanding scriptural backing for the action. In a highly unusual reply, the bishops declared that not every decision necessitated scriptural mandates. Rather, they stated, “as a matter of expediency we must make some distinction to meet existing conditions.”6 The decision to take away the shared communion cup particularly devastated Fannie.

For the better part of four years, Swartzentruber went along with the dictate. She took communion from a separate cup. She watched Eastern Mennonite College deny admission to the daughter of one her African-American co-believers, Roberta Webb. She said good-bye to her long-time companion, Rowena Lark, as Lark and her husband moved away from the Jim Crow South to plant churches in Chicago. Swartzentruber went along with the demands of her religious community—until she could no longer do so.

During the communion service at Gay Street Mennonite Mission in the fall of 1944, Swartzentruber had had enough. She got up and marched out.

And she kept on marching. Toting her youngest daughter Rhoda in her arms, Swartzentruber walked four miles out of town to the farm north of Harrisonburg where she and Ernest lived. When Ernest returned home from church, she informed him that “she would never again sit through such a service.”7

Disruptive actions, whether ecclesial or otherwise, bear consequences. Church responses to those who transgress boundaries of decorum have often been just as debilitating, if not more so, than secular responses. Communities who preach grace and reconciliation in the midst of retaliation amplify the damage they do to transgressors. Even when camouflaged with scriptures, gaslighting is still gaslighting. In this instance, Mennonites were no exception.

A scant four months after Swartzentruber disrupted the Gay Street communion service, members of the Virginia Mennonite Board of Missions dismissed Fannie and Ernest from their positions as matron and superintendents of the Gay Street mission.8 Although officially cloaked in bureaucratic double-talk as “voluntary expression of willingness . . . to discontinue,” the decision was anything but voluntary. Family members attested to the trauma that both Fannie and Ernest experienced in the aftermath of their dismissal, trauma that was furthered by the ecclesial gaslighting they encountered.9

It was not until 1955 that Virginia Conference leaders overturned their segregation dictate. In a statement that year they publicly acknowledged their “former spiritual immaturity” and pledged to extend “the right hand of fellowship” to all “true believers.”10

But Fannie was not present for that conference statement. She and Ernest had left Harrisonburg in the aftermath of their ejection from Gay Street, settling in Greenwood, Delaware, in 1946, and then, following the death of her husband in 1986, moving to northern Indiana where she attended a Baptist congregation through her passing in 1999.

Regardless of the prophetic truth they often offer, holy disrupters bear the long-term consequences of their actions. In Swartzentruber’s case, her spontaneous march from the sanctuary to the streets resulted in her dismissal and in a long-term alienation from the church community that she loved.

Historical precedents are only sometimes illuminating of our present circumstances. Both past and present are complex and never map exactly one on one. But there are connections, tendrils we can draw across time. In this instance, I simply wonder whether the church can do better now. How will church leaders respond to those who have followed in Swartzentruber’s footsteps? Can they respond with grace rather than retaliation? Will the church let go of its gaslighting past? Will they find better ways to respond to the actions of holy disrupters like those who have called out church leaders for their collusion in the face of sexual abuse and those who have demanded that the voices of the LGBTQ community be included in the conversation about human sexuality?

Swartzentruber was alienated from her faith community, but she and her husband Ernest did experience a modicum of restoration. In the mid 1980s, while visiting the congregation that emerged from the Swartzentrubers’ work at Gay Street, the Broad Street Mennonite Church, members of the congregation apologized. They used the occasion of their church’s fiftieth anniversary to acknowledge that Fannie and Ernest had been wronged and that, on behalf of the Virginia Conference, they were sorry for their actions.

Fannie and Ernest were left in tears. Their family members later reported that the gesture, even though small and absent of official Conference approval, had freed them from a “depth of pain” that they had born for three decades.

In our present moment, I can only hope that the church moves much more quickly to restoration with those who have offered holy disruption.

11 thoughts on “Fannie Swartzentruber, Ecclesial Gaslighting, and The Witness of Holy Disruption”